Boat –Taxi – Chicken Bus – Tuk Tuk to Granada. Chicken bus was fun and a bit of an experience for Si… but sadly it didn’t take us to Granada as promised. Messed up a bit when we got there. For some reason, even after being told the rooms were cramped and have bed bugs, we thought we shall stay at the Bearded Fucking Monkey (perhaps Fucking was not in the name, I am unsure). Tired and hungover (mainly me) we went off to have a big, INCREDIBLE lunch. 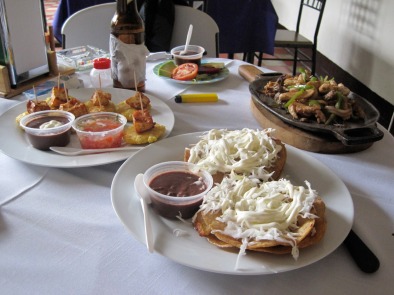 Tostones (fried plantain) with queso followed by fried tortillas with queso, cabbage, crème, and pico de gallo… But it was HUGE.

Walked through the colonial streets, up to the Malacon and walked through the old bombed out hospital. Even stumbled across some metal/hardcore band (with operatic vocals) playing in what seemed like an old man (Latin) pub. But a lot of it was in angry silence and missed out what we wanted to do. Slept for 11 hours instead of our usual lovely dinner and a few beers.. but considering that’s been the worst for us.. we are pretty gosh darn lucky! Especially when you think of our honeymooning friends who volunteered at an animal sanctuary where people had tried to break out the animals and take them to another sanctuary due to inhumane conditions… on their honeymoon (as animal lovers). Instead of helping rehabilitate they ended up doing tours for the crazy owner and trying to explain why many were caged (which they couldn’t understand themselves).

Like you would expect there is a lot of political graffiti around; much of it for the FSLN (Sandanista party, who led the revolution to overthrow the Somoza dynasty), but I get the impression this isn’t a blind man’s cult, and though Ortega is President this is because he is the leader of the FSLN, rather than because he is Ortega. They had a really difficult job the first time round in power, rebuilding a war torn country with very little outside support, but the slow progress made led to their decline as the popular party.

Nicaragua is still largely in poverty, and is obviously very poor with the majority living as farmers/peasants with only basic needs satisfied. (I am disregarding the youth adults sitting near me with iPods, bling on their fingers, dressed in Nikes and sportsgear). As this is being typed after my trip the Nicaraguans, I have learnt are seen as poor, but great workers by the rest of Central America – some nations seem to praise this (El Salvador), others seem to think they are beneath them (Costa Rica). Of course, these are all generalisations, but meeting the people and seeing the way the politics, they seem to largely make sense and ring true. Seeing the lower living conditions but the family units 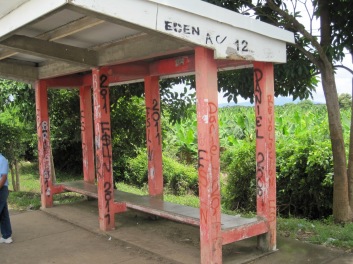 and the children running around happily and contrasting it with the cramped, unsafe council estates in London (or anywhere in the first world) you wonder which is better? Somewhere where people fight to be educated? Or where people hide to stay away from school as soon as they reach their teens? I guess there is still the American/Western dream – that it will be better, that they can make something of themselves, no matter how shit and unappealing the early years of immigration might be. Steph and Conrad told me about a Costan Rican, who after a few beers starting starting picking on them from being from the USA, mainly because of the ease at which they could travel into Costa Rica, but the difficulty for him to enter the USA (non-refundable first interview fee is $195). His frustrations are totally understood, and this may come as a shock to those of you who think I’m an all out namby pampy tree hugging socialist lefty (which I am not), but I think it’s necessary to have the strict laws. Sadly, they didn’t actually ask him why he was so desperate for a short holiday in the USA – which even without the fees would have cost comparatively a small fortune for your average Costa Rican – one flight, a years wages? I guess they still have the romantic notion of the West, rather than seeing the issues with illegal immigration, or the poverty, crime and overcrowding. Until they do become a wealthier nation, with less people staying illegally they need these strict visa requirements, but the saddest thing is that so much of the poverty and civil wars that messed up these countries were directly due to involvement of the USA and its allies.

My thoughts, that seem to make people angry, is perhaps it would be better for people in stable, yet not ideal countries to try and realise those dreams at home. Fight for better opportunities there, help build up your country instead of deserting it? I am sure this is an easy view to make from a comparatively wealthy Western girl, and even though I am a daughter of a refugee, that was fleeing for life, not economic opportunities. Social and political problems needed to be changed at the source, by the people that it effects. Help and education from outside I do believe is beneficial, but we can’t come in and change the future as some master/dictator problem solver and provide aid continuously. My beliefs are exactly the same in the personal sphere – people need to learn to help themselves and realise it’s their duty to fix their problems – from the source, not a pill, not by whining, not by expecting someone else to do it… I do actually believe that Nicaragua is slowly but surely modernising and is headed in the right direction. I have everything crossed for them, as in the short time I was there I really fell in love with the country and the people.

Right, back to the travels. Estelli was such a mood uplift from Granada. Found a really cute family run hostel with rooms surrounding a garden courtyard, complete with duck and turtle! Our room was like a 70s honeymoon suite in a B&B in Cornwall (though complete with Cable TV… haven’t been missing it much, though nice to watch a couple of episodes of 2 and a half men…) Looking at the photos of Estelli you might not understand why we loved it so much, but it was just so real. A normal middle of the road Nicaraguan town. Not touristy, no major attractions (well, one for me), just a little insight into an ordinary way of life for a fairly normal urban Nicaraguan. It’s a cowboy town in the mountains and was an important area for the FSLN during the civil war due to its location near Honduras, El Salvador and being on the Pan American Highway.

The reason we (I) HAD to go there was because of the ‘mothers of the martyrs museum’. Si was more interested in ‘cowboy’ town. It’s a tiny museum run by the Mothers and funded entirely by donations. It contains pictures, information, clothing and biographies of the Guerillas who lost their lives during the Contra War. It wasn’t as part of me expected, a propaganda museum, or overly sentimental, but very personal yet factual and informative even showing articles of disappointment since the war, which I did not expect to find.

We spent the rest of the day wandering around, just people watching, bought a few things, had a few beers, went to a pizza place for lunch (run by an Italian born, Brooklyn resident, now in Nicaragua). Ate dinner at a very local restaurant overlooking the streets. Up early the next morning to be on a 4am bus that would pick us up from a random Texaco Gas Station. 4:45am and still no sign of a bus – or anyone else waiting. Occasionally a few random drunks would turn up and spark up conversation (seemed to be the place to be at this time) but couldn’t help but worry a little bit. Finally the bus arrive about 5:30 a.m. and we were in El Salvador by 9:30 a.m.

What a beautiful day for a cycle & quarry swim. What a beautiful week to celebrate @patrick_jones21 birthday - the granite ninja warrior he is ❤️‍🔥 (& more.) Feeling super grateful - for a day to day life right now when I don’t care what day it is - happy whatever is going on - always training - working two jobs I love - flitting between being utterly energised or exhausted. But content. Beyond content. 💎⚒🖤 #lightitup
Out of all the things I’ve been blessed with, I am, I’ve done - being Auntie Lu tops everything. On a group trip around Southern Africa (with strangers initially) we were saying one word to describe each person. Mine was ‘Auntie Lu’ - I was a little confused/taken aback at first, but they explained & I realised there was no greater honour. I also don’t think I knew how much I talked about them all. (And still do.)
This song was my soundtrack to moving to Hong Kong. Always felt like an empowering comfort blanket. Surprised I’ve never tried to cover it before, maybe cause it’s a dance tune. Or maybe it just wasn’t the right time. ❤️‍🔥
Latvian family hangouts in and around Liepāja. The beaches are stunning, the wind was insane and I only lay down in about 50cm on water, covering myself, crawling along as the currents were insane. Still, the non salty Baltic Sea was as beautiful & soul refreshing as ever. Amelijas was the best tour guide & adventure buddy 🥰 🇱🇻
I remember telling a friend years ago, one of my favourite things about life is it can change so quickly, you never know what’s going to happen, who you are going to meet, what small moments or decisions can change things hugely. Of course I hoped for changes when I first turned up at KO, but I had no idea. I even thought how it doesn’t matter if I don’t really get on with people, fit in, cause I’m there to train. But here I am, 9 months later, part of the team (reception, not coaching!!) and very very much feel part of the community & family. And getting more comfortable training, sparring - this is just the start. I’ve always said the most important thing for me is to enjoy my day to day life - be content whether it’s a Tuesday or a Saturday…. And, after trudging through a lot of shit the last couple of years (like all of us) I’m there. After a lot of persistence fuelled by passion I’m now working two jobs I love & training to be something I never thought I could be, until recently. I feel good. I feel my spark again. ⚡️💎
Here’s to 7 years sober. Not drinking is easy now. I don’t want to. The only reason it ever comes up is because other people drink. But it was hard. When I think back to the early days I have vivid memories of scenes, emotions I never talk about, don’t like to vocalise. It was that hard. That crazy. But worth it all - to be here. Mentally & physically. To stop lying to myself, to give myself the self worth and respect I deserved. To enjoy the freedom of not succumbing to addictions. Freedom to be happy in my own skin, in my own beliefs - being aware, present when making decisions, taking actions. Life is more fun now. I’m more confident. I surround myself with people I love, and who love me. So here’s to me, to saying no again and again and again even when others were telling me yes, just go on… have one. And trawling through so much shit, being born again like an highly emotional teenager, learning to navigate all the feelings in a realer, louder, brighter technicolour world. So, here’s to 7 years alcohol free. ❤️‍🔥 #lightitup #sober #straightedge