Met by Jorge, or Tours In El Salvador (http://www.tourinelsalvador.com/) at the El Amitillo border. After deciding I wanted to visit the Guerrilla stronghold and El Mozote massacre sight I stumbled across his reviews on trip advisor. Enquiring if we could do a day trip with him we ended up booking a 3-day tour way above our budget.

I know when you are travelling for a while budgeting is really important, but I’ve always hated the ‘no guide, we can do it cheaper and learn ourselves’ attitude. Part of the learning is the interaction, and you really can’t learn as much by a few badly translated signs as a guide who lives in the place… unless you are unlucky and have a bad, disinterested or lying guide… and I’ve had a few of those. In the Amazon my guide used to make up stuff, that really wasn’t necessary – we were in the Amazon! For example whilst looking at one, he told us that the Anaconda was the most poisonous snake in the world. Deadly it may be, but for it’s strength alone. On the Inca Trail our guide was explaining the greatness of the Inca’s and their respect for human life, in contrast to the Spanish. I enquired on how their conquests differed to the Spanish and he told me that they asked the people they invaded to join them first. But, if they refused, then death. See? Understand the difference? Not that I believed him either. I don’t think he liked my questioning. Sometimes it quite quaint though, or interesting in itself – like some of the guides I had in Vietnam, that were walking party propaganda machines. 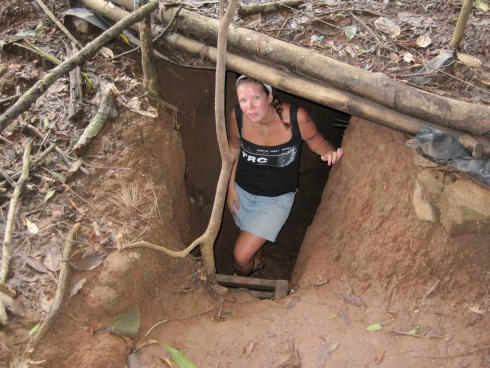 So, Jorge drove us to Perquin, in north-eastern El Salvador which is a small village of 10,000 (though seemed closer to 300). It was the main FLMN area during the war and a no-go area for the Military/National Guard and they could only attack by air… until the Guerillas got hold of anti-aircraft guns. After the El Mozote massacre Colonel Monterrosa was tricked into believing he had captured a guerrilla radio as they had faked broadcasts for him to pick up on. On spotting the radio, surrounded by chicken blood to make it look like a battle had taken place, he insisted that he be the one to take it, and brought it into his helicopter. Inside this ‘radio’ was explosives, which the guerllias in hiding nearby detonated, blowing up 2 helicopters and killing all inside.

Our hotel was gorgeous, the Perkin Lenca, run by I believe a white ex-guerilla (or at the very least sympathiser who was around during the war) and originally co-owned by one of the female guerilla’s who saw Monterrosa’s helicopter blow up. It was a log cabin, complete with hammock on the porch. A small step up from our usual hostel rooms. 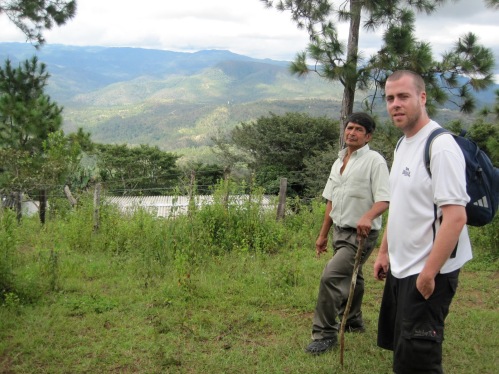 At the war museum we had a tour by an ex guerrilla, who though limping from shotgun wounds was much more agile than all of us. As well as talking us through the museum, which was fascinating, he took us into some original trenches, bomb craters and up to a main look out point. And to see the remains of the helicopter that had been blown up as a revenge attack after the massacre. We ate dinner in Perquin with Jorge, discussing the war, MS13 and El Salvador in general over a traditional meal, which for me is tortillas, tostones, black beans, salsa, creama… I just can’t get enough of the stuff. For Si & Jorge? I seem to remember it was Pollo y Papas Fritas.. also becoming a central/south American tradition.

At this point we were still trying to work out how the war went on for so long. Jorge explained that the country was split 50/50, but with most people in poverty, ruled by a small elite something doesn’t seem to add up. Aside from those being funded by the US, why so many would fight the guerrillas after the assassination of Oscar Romero? Perhaps the fear of Communism? Fear of change? Jorge suggested that people preferred to be submissive. There seemed to be no obvious hatred to exploit (religion/ caste/tribes)? We were told that the military drafting age was 18, so many guerrillas ended up fighting their brothers and often people would flee the country or go into hiding in order to avoid conscription, but there is still something missing! Though there is always is I suppose – the Chinese police killing the protesters at Tiananmen Square… even at home when we get fenced in for protesting peacefully and legally against a war!