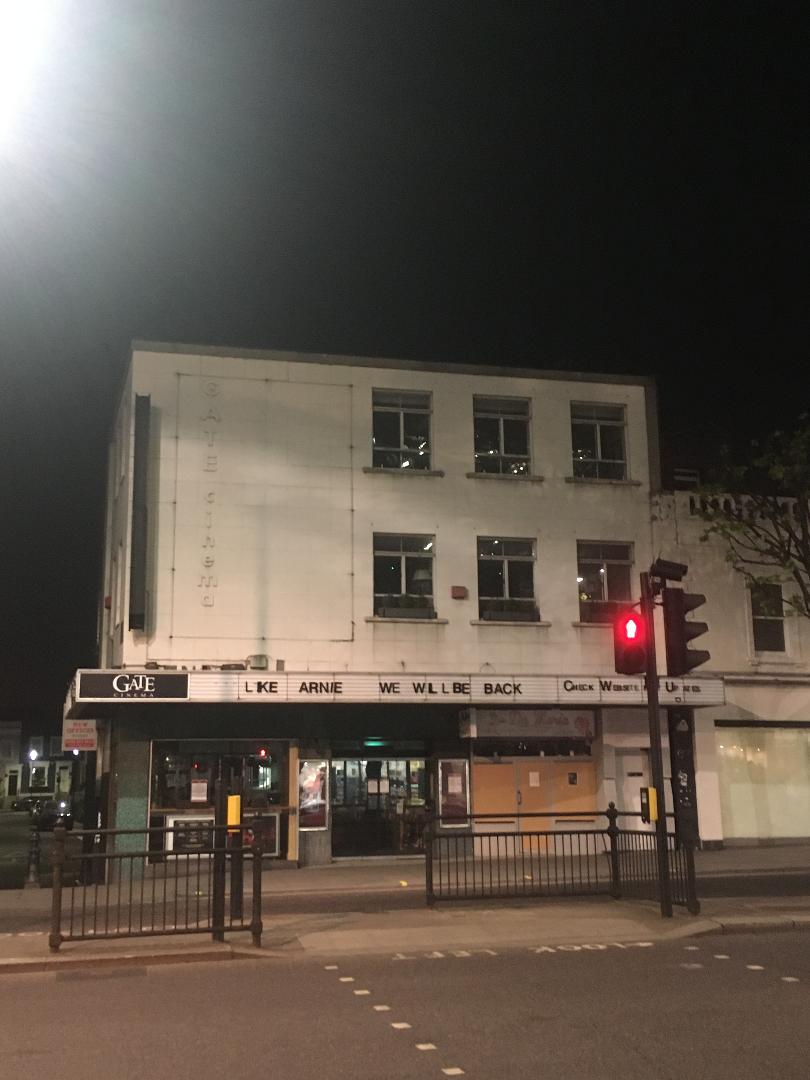 I was undecided on whether to go to the cinema once I got out of quarantine. I missed it a lot, but, you know, Covid. Friends that had been said they’d pretty much had the whole place to themselves, and so when I got an email from my local cinema (The Gate Picturehouse) saying it would be closing on Friday 9th October, I decided to go see the film I was umming and ahhing about, Herself – as part of the London BFI Film Fest.

Masked up, I sat in my usual seat, with lots of space around me. Perfect. The film was emotional; set in Dublin, with a female Director – ultimately about domestic violence, re-building life, and a house. I welled up a few times during the movie, and cycling home, a few tears flowed, and I realised it wasn’t just the movie itself, but life right now, and all the memories that had popped up, by just being back inside a cinema.

I thought about how much more than just watching a movie the cinematic experience is. I first went to the cinema alone feeling a little self conscious and awkward back in 2005,  because no one was interested in going with me to see a horrific genocide film, Sometimes in April.  Despite the subject of the movie the experience itself felt a little magical. So chilled and liberating, a date with myself. Since then, solo cinema dates have become a regular thing,  the quickest and easiest way to take a break from my real world. A place in which I have to sit, and focus on nothing else but the story unfolding in front of me. How when Margaret died I went two days in a row to not have to think (Whiplash & Southpaw.) Shut off, but immersed in another world. When my head won’t stop buzzing and I can’t sit still but I’m exhausted and restless, I used to send myself to the cinema. When I was super sleep deprived because of a tough time I was going through I curled up at the back of the cinema, super excited to watch Selma.. and promptly drifted off – a little annoyed I missed the movie, but I loved that I just felt so at peace in there to finally get the sleep I needed. On my solo round the world trip I sought out cinemas in the bigger cities – when the loneliness really hit. But I love going, not just to escape, but to feel empowered, to learn, to be inspired – to laugh and cry with strangers.

Ahh yes, the shared experience. The laughing, the crying, the disbelief, the suspense – when I think about seeing a movie with someone else, it’s never just about the movie – going with my nieces and nephews; always laughing at completely different parts, sobbing (twice) during ‘Up’ whilst they were completely oblivious to the heartache being described (the picture scrapbook!) Being laughed at by them and my brother for getting popcorn at 9am – but being smart enough to get a large one, because they of course ate at least half of it. Being drunk (oh my we must have been so irritating) at the second Bridget Jones movie – the ending was a little hazy, but we do remember agreeing (loudly, perhaps also high-fiving) to a future ski trip (it never happened…) Curling up with my bezza and her 8.5 month bump on a shared fancy sofa watching 1914, – the smell of sweet popcorn, the real stuff, crystalised sugar – taking me back to watching ‘The Land Before Time’ in Pacific Place (HK) when I was 6. Cinema Club – so much fun… aside from seeing Transformers (OH my that was bad) – Lying on the floor outside the UA Cinema with such crippling period pains waiting to see Titanic, but determined they would pass – I was desperate to see the movie – I’d already seen the two B&W’s, dragging JJ to see Shawshank Redemption at a really random cinema in Wan Chai – because nowhere else was playing it. Taking my brother to see Japanese WWII movie, ‘The Sun’ to cheer him up – the longest & slowest film I’ve ever seen (9 hours I think…? Half the audience left… but we stuck it out – and it was, ultimately, brilliant.) Coming out of Captain Phillips with Mum, ‘well, that was pretty heavy wasn’t it?’ Turns out she had no idea what it was about when she’d agreed to come with me. Sausage Party. Wow – that was a beautifully bizarre shared experience of WTAF is going on. Ha. Going to see an amazing Hong Kong movie (Still Human) with one of my besties, whilst she was visiting Hong Kong . The film fests, the human rights film fests – Q&A’s – so much brilliance, so much pondering, sharing.

There are so, so many more memories – Sex and The City 2 (WORST MOVIE I HAVE EVER SEEN. It makes me angry to even think about it) but tonight all these little flashbacks of my life popping up – all connected just by sitting in a room, watching a movie, it was beautifully overwhelming – my soul coming out feeling a little refreshed. The pure magic of the cinema. I hope you aren’t gone for long.

Diving into the next chapter of life... huge, huge changes. I’m very excited, grateful - overwhelmed, in the very best way 🥲 Yes, also nervous but, in a way, fuck that, doesn’t matter - just going to do what I’m going to do.... 💙
Family boxing night 🥰 They gave it everything for the whole session - so proud! 💪💪💪 Boxing is way more than just exercise, than ‘violence’ - it’s empowering, mentally taxing, and... fun. Then add the community around you... what’s not to love?! So special sharing my passion for it with these two, and seeing them work hard, whilst really really enjoying themselves 🥲🖤💞 Thanks @andrew_burns_fitness for having us (& the coaching!) - @mirrihr for taking Cecile under your wing & @kirsty_is_typing for the energy!! Always! 🥰🔥
Strummed & sung a little before boxing. An oldish tune. It’s funny, months after I wrote it, I then met an awful awful human. When we ended things he thought this was about him & quoted some of the lines back at me. 😂😂😂 Was quite the experience, dating a narcissist.
Friday night cover. ⚓️ Anchor ⚓️ by Novo Amor. Heard this last night on the BBC drama Vigil; it’s so beautiful. Voice is pretty weak, but guess that’s what happens when you don’t practice. So, I’ll change that. 🖤🤍