I’m on a boat to Isla de Ometepe in Nicaragua. Costa Rica and Panama have been incredible, but this is just… hmmm.. hard to describe, but I can only compare to arriving in Cambodia. So much recent history, so lush, so beautiful. Somewhere I’ve really, really, really, wanted to go. And here I am. On Lake Nicaragua, heading towards the twin volcanoes, which has freshwater sharks. I know we won’t see any (thanks dictators and shark fin soup) but they are here! Ahh!! Nicaragua! I love you already! And your Tona beer! 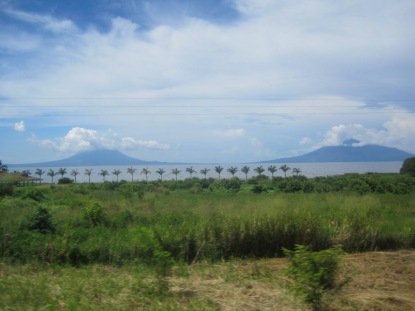 Just made it onto a bus headed to Estelí via Managua. Poor Si thought the bus was leaving with our bags whilst I was off buying (essential) cookies and water…

The boat journey to the Island was incredible. Drinking Tona, sitting on the El Che Guevara ferry with a view of the volcanoes; one of them smoking and active. Hostel was lovely; friendly owner, hammocks overlooking the lake and the non-existent beach meant tables and umbrellas were in the water for our afternoon beer-swims. Dinner at the cutest restaurant next door (no front entrance – had to climb and wade) with two English couples. Power cuts, rainstorms at about 11pm, Si a little sad (or utterly depressed) as he threw half his steak into the sand, otherwise a great evening getting soaked on the way home. Everyone (Nicaraguan) we met seemed genuinely kind. Perhaps naïve, but I’ve met enough people that turn rude because you haven’t tipped them/enough or bought their stuff/taken their tour to differentiate.. I think.

Many beers meant we didn’t sleep till midnight (WAY past our bedtime) and made for a sick Weeze in the morning. Supposed to do a guided trip to a 30m waterfall, but the roads were impassable due to landslides (at least in our “4×4” which was in fact a mini bus). Went to see the 300BC petroglyphs (found that out from Wiki… our guide though lovely, only spoke Spanish… and my basic Spanish did not stretch to archaeological standards… ) Went to a natural mineral spring pool and Cache Verde.. both nice.. but hardly worth the U$35 each… I think the excitement of being in Nicaragua distorted budget judgements (and the Tona.. always the Tona…) Back at the hotel we went and sat in the lake drinking beers chatting the hours away, facing one of the volcanoes and THAT was priceless. Finally learnt a card game that evening from a British and Canadian couple we met… though still mourning the loss of scrabble, but Si happy to be able to order his steak again and eat it all. You win some, you lose some.