Made the 6am boat-bus-bus journey to the rather shitty city of San Jose. That may seem unfair… but everywhere we passed was covered in iron bars, we were advised to take taxi’s everywhere(even a 5 minute walk down the road from our hostel, in a ‘nice’ area) and it just seemed bleak.

The Hostel Pangaea on the other hand was great. Roof bar, free internet, very laid back but professional – was exactly what we wanted in this necessary stop over place. They even had a pool, but no time or need to use it. Originally our plan was to move straight to Nicaragua but we decided to take a day trip to the active Arenal volcano, which last blew in 1968 killing 78. Had dinner next door to our hotel and I had a taste exploding black bean soup (the picture, I am aware, does not do it justice… ). Si’s highlight was probably the picture of a rather stoned younger Mel Gibson surrounded by girls on the wall. 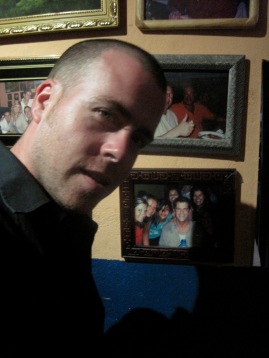 The day trip was definitely worth the extra day – 6 of us on the tour, a 22-year-old girl from Gloucester who has spent the last four years in Illinois, a German from Black Forest (he confirmed this was where the cake came from…) and a honeymooning couple from Washington State. Great group of people and finally Si managed to see what I meant about how I love meeting people travelling! On the way to Arenal we visited a Church (not sure where it was but there was some significance of it being one of two… the other being the in Philippines..?) Still, nice to see the swallows and butterflies flying through it and interesting to see at least 30 people there to worship on a Monday morning.. not like your average COE church. We then moved on to an Ox Cart factory, which are no longer used for practical purposes in Costa Rica (they are in Nicaragua), but watching the painting of the intricate designs was really impressive. I wanted an ox cart, but had to make do with a mini one to use as a toothpick holder (I like to give my random trinkets a purpose).

The drive to the volcano was through fantastic scenery coupled with great chat on US Politics and travelling stories. I love the open and frank (but non aggressive) chat. I view my mind as a once blank slate. With each trip, book, documentary, conversation (even if you think I’m not listening and getting mad and don’t agree…  trust me.. I’ll think about it later and take it into consideration…) it’s like I’m wiping away the blankness revealing countries, knowledge… of politics, history, experiences, opinions, with so much of it from just looking, or talking to people. I love hearing about different lifestyles, reasonings, experiences, whether or not I agree with them. At Uni I remember a friend of mine started blanking me. I finally found out it was because he (as an British Indian) saw me talking to a neo-nazi, thinking I was befriending them. In reality I wanted to know they thought what they did, and why they thought what they did. They weren’t my friends! I did manage to find them useful for my (AWFUL) dissertation… and a few months later one of the younger boys who I’d spoken to (16?) that I’d taken a shining too (in that he just seemed lonely and abandoned and these guys provided him family) came running up to me at a rock club saying how he had nothing to do with those racists anymore. He spoke like a proud 10 year old, and I felt like a proud elder relative!!

Anyway. The Volcano. We had lunch in La Fortuna, and whilst eating saw it spurt some grey ash. Writing that, it doesn’t seem exciting. It really really was!! Then we headed to the hot springs; some insanely hot. Drinking beer in hot pools overlooking a volcano with great company was priceless. We had to join another group at one point, possibly a slightly pricier tour, thanking god that their hotel had Wifi and how charitable they all were made me even more thankful of our group!

Happy happy happy birthday Queen Naomi you absolute awesome human. @ms.naomi.j - I miss laughing with you, eating with you, ranting, crying, with you. But definitely the laughter the most. Or being on our soap box. Did I ever tell you how gorgeous your hair is too?! 😍 Hope your day is as fabulous as can be in these current crappy times and I can’t wait to see you again. 💞💜💙🖤
It’s cool how playing some simple notes sooth my mind so quickly. Even with a background of Mum clattering in the kitchen & Dad cheering on a (current) 3-0 Arsenal win (how gender stereotyped...) 💛
@joshua1013 was sentenced to another 4 months in prison today because of attending a protest in a face mask in Oct 2019. He is currently already in prison for organising another protest (13.5 month jail term.) A little late for the #runforfreedom campaign but my runs are often fuelled by rage at the human rights abuses I read about daily. Today I donated to @now4humanity - who I protested with outside Downing Street two weeks ago. A pro-democracy group (amongst other campaigns) currently focusing efforts on Hong Kong, Myanmar, Venezuela & Belarus. Follow them, donate, sign, share information. This is not the end for these places - it is the start of something different. But they need all the support they can get. #milkteaalliance #standwithhongkong #whatshappeninginmyanmar #freebelarus #freevenezuela #whatshappeninginthailand #hongkong
Yesterday was very cold. But it was sunny. I went for a run. I felt like a plodding potato with pineapple hair but it felt good.
Selfie central. I wrote a lot of words, but deleted them. I don’t feel like talking right now. Some shots for my IG photo diary of the last few weeks. Some of the hardest times, some of the best times - the small pockets of goodness 🖤💎⚒
Just some recent London scenes. And a wicked shoe/sock combo. 💖