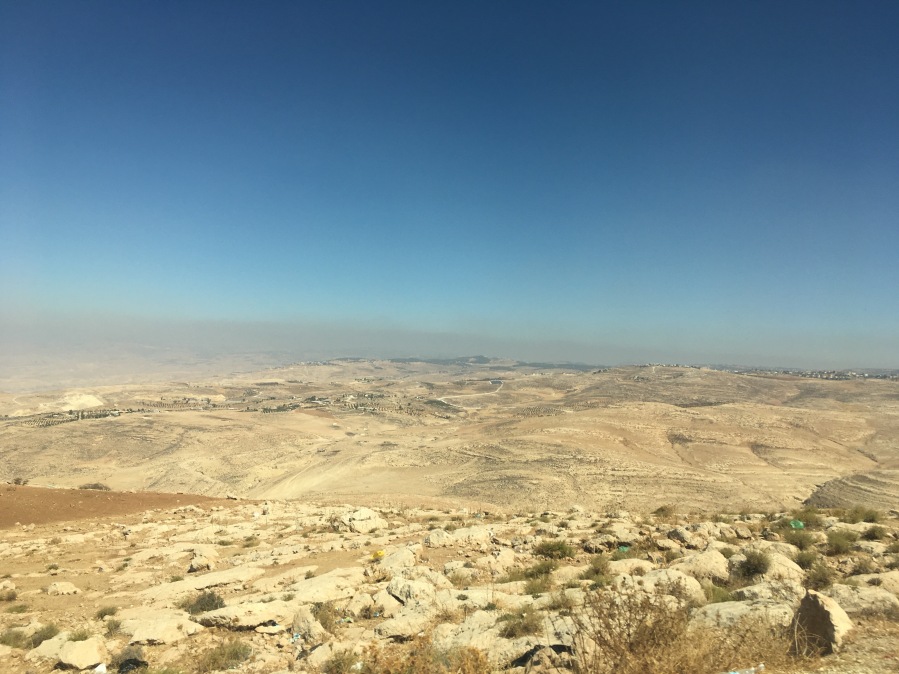 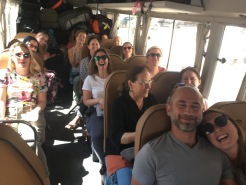 Up early the following morning we met our tour guide and driver – and headed to Madaba to look at a 6th Century mosaic map of the area (Palestine/Jerusalem/ Nile Delta) which was discovered under the floor of the Greek Orthodox Basilica of Saint George.  It’s quite hard to get your head around how old what you are looking at really is.

We then headed up to Mount Nebo, where not only would we see more intricate, centuries old mosaics, but be greeted with the most awe inspiring views over a dry, vast, breathtaking landscape that reminded me of Palestine and filled me with the same amount of joy!

For many this is a place of pilgrimage where Moses is said to have viewed the promised land that he would never enter.

We then headed down, down, down to the Dead Sea; the lowest point on earth, with a sea salinity 10 times more than ordinary saltwater. I wasn’t sure what to expect, but being so positively buoyant is a really strange, fun experience! So much bobbing around, almost impossible to stay in one position for any length of time, and even harder to try and get a group shot… My favourite position was standing vertically in the water, with half my body out, but floating, feeling quite weightless and as if I had some sort of magical power! 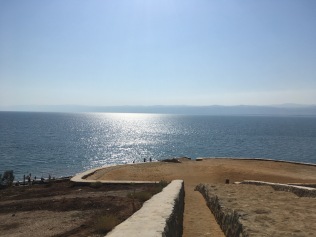 I knew it was super salty and despite trying hard not to get any water in my eyes whilst attempting a choreographed group photo I got splashed and wow – what a sensation. Fighting all my instincts to rub my eyes I kept repeating to myself that they were designed to clean themselves and in time they would – and I would be okay. And you know what? They did, and I was.. but man, it was not pleasant!! 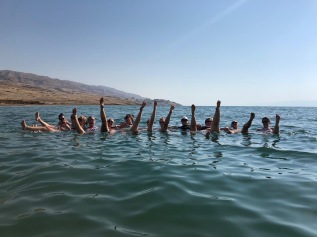 I then followed Omar away from the main bathing area and found a lot of natural mud to cover myself in! For some of the women this was actually a little painful, but I kept it on for 15 minutes with no problem.

Before dinner we hung out and danced in the pool – many fuelled by cocktails – I of course just love to dance, all the time! I watched the sun set over the dead sea from my balcony, and it was pretty gosh darn spectacular. After dinner there was the chance to watch some dervish dancing (which I’ve seen before, and it’s great; mesmerizing) but I’d caught up a bit on Hong Kong news, and just needed some time out, some time alone. 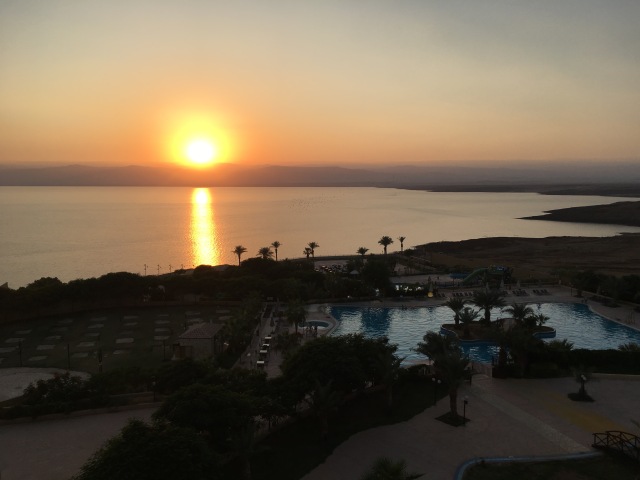 The next day was all about the views! En route to Dana Village (situated on the edge of Wadi Dana, Jordan’s largest nature reserve) we stopped a few times to admire the natural scenery around us. Firstly, next to the Dead Sea, looking up at a lady statue formed of rocks – sadly I don’t remember the tale that went with it, but it was very cool to look at. 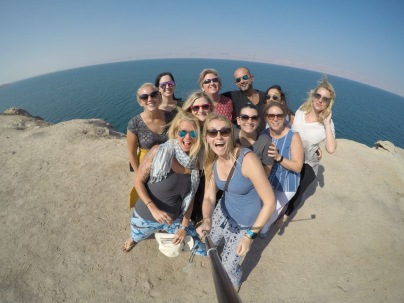 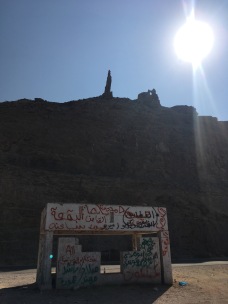 Then, one of my favourite points of the trip (though to be fair there were many, many ‘favourites’) which was a toilet stop. An isolated café on the side of the valley, it had the most incredible landscape vista, and the barista was so friendly and enthusiastic, delighted I believe to have this group of women at his café! A mix of the sunshine, caffeine & toilet relief seemed to make us a little giddy and a hilarious photo shoot ensued! 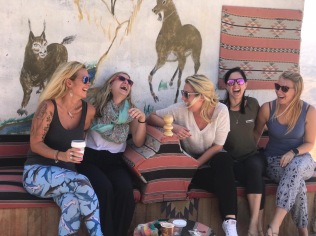 We then spent a few hours at Dana village, which dates back around 500 years, again looking out at vast, incredible views (I am running out of adjectives here!) and again, feasting on another delicious Jordanian lunch. I loved the old style of buildings, both the newly restored/ renovated ones as well as those left to crumble. 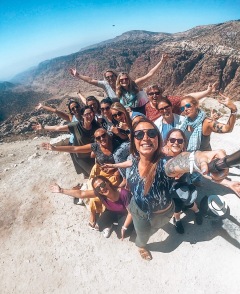 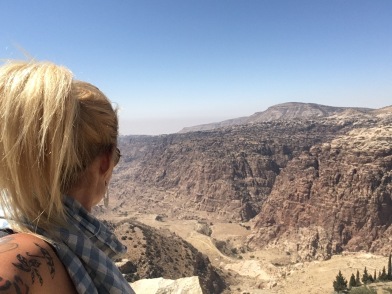 We climbed even higher to almost 1000m to visit Shobak Castle, initially built in 1150. A fortress in one of the highest points of Jordan, the surrounding hills absolutely fascinated me with the different colours and formations of stone and sand. We spent a few hours walking around, exploring the ruins and learning more about the fairly brutal history, battle after battle with ownership changing hands many times. 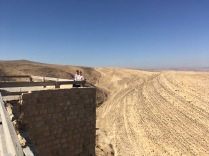 It’s hard to capture, let alone describe the majesty, the beauty, the vastness of the landscape that was around us. I knew it would be spectacular, but even then, what I was seeing and experiencing surpassed all expectations. 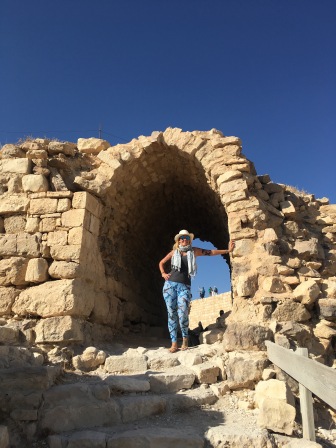 I wanted a snack, and after chatting to the castle café owner about his kids (he had pictures on the walls) I spent some time with him going through all the foods seeing if there was something dairy free for me. We eventually found these tasty chocolate wafers… then as he finished pouring my coffee he asked, ‘would you like some milk?’ I gave him a confused look and he burst out into a huge belly laugh. Totally had me. Loved that guy, and hearing about his super smart daughter that was training to be a Doctor.

As if that wasn’t enough for one day, we then were taken to ‘Little Petra.’ Petra itself is actually the name of a city in Southern Jordan, but usually associated specifically with one archeological site. What we saw that evening was epic – the sandstone, the carvings, the size & steepness of the rocks – it was hard to imagine what ‘normal’ Petra would bring the following day! 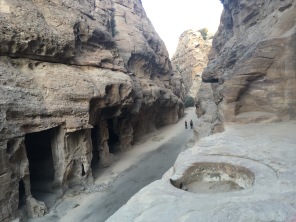 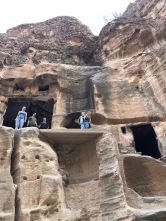 One final surprise, our accommodation that night! We stayed in a private stone walled villa with an open courtyard, greeted by huge smiles and welcomes from the ladies that worked there, and treated to another delicious fresh Jordanian buffet dinner, complete with Kanafeh freshly made in front of us. (I of course couldn’t have this!) 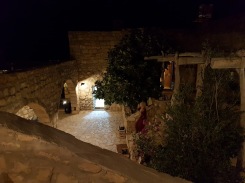 After dinner some of us have henna tattoos done, and spent the evening chatting away with the local ladies.

The next day, Petra proper…