When I left my hostel on Monday morning my heart sank a little. I was prepared for the cold, even for a few short showers, but with the dark, grey skies raining down a mix of rain and snow that wasn’t going to settle, I just foresaw myself being very wet, and very cold all day. And that’s exactly how the day played out. I came back to the hostel later than night, very wet, and very, very cold, but returning from a most magical day. 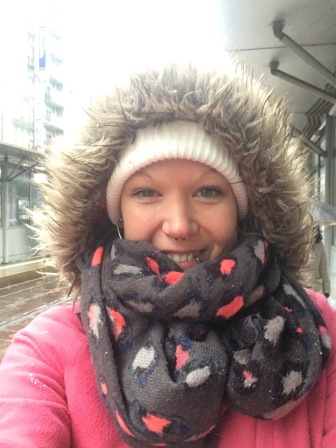 After a quick breakfast at the vegan friendly Kissasaeki (which, I would have definitely gone back to for lunch/dinner if I had more time) I headed to the streetcar stop heading to Miyajima-guchi. I couldn’t see much out the window, but the enthusiasm of the lady sat opposite me, to my positive response when she asked ‘you – Miyajima?’ made me think perhaps this wasn’t such a stupid idea on such a horrible, wet day. I generally don’t mind horrible, wet days, I just didn’t have enough waterproof and warm clothing to combat it. About 50 minutes later I arrived at the ferry port, bought a return ticket (¥360/£2.80) and laughed my way on to the ferry, smiling at the state of me, the weather and failing to make out the island in the distance. 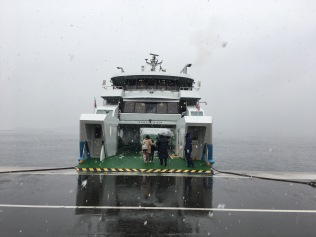 As we sailed towards the island I sat mesmerised watching the snow dissolve into the water, and as I started to see some beautiful snow capped temples my heart warmed and excitement built. My original plan was to hike to the top of Mount Misen, via Daishoin Temple, which should have taken me two hours. I decided that now, no plan was the best plan, see what happens, and started walking. As soon as I left the ferry terminal I didn’t want to be anywhere else and felt so blessed for this snowy, cold day! What I saw before me was absolutely stunning. Temples, hills, monuments, statues, beaches, all covered with snow. A couple of deers ran in front of me. I walked on further, and saw deers on the beach. Wow wow wow. 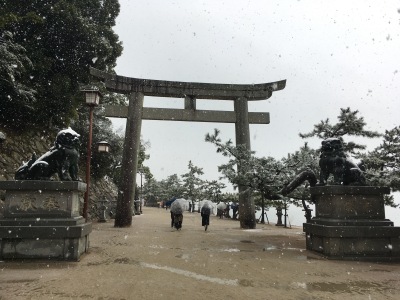 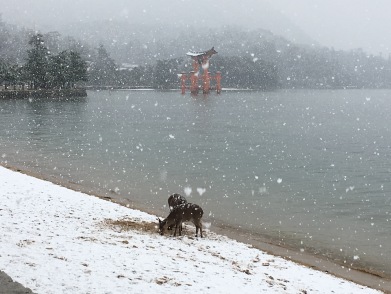 After warming up for ten minutes in one of the many souvenir shops I headed towards the most recognisable symbol of Miyajima; O-Torii (Grand Gate.)  It even has its own emoji. This, and the Itsukushima Shrine as it stands now were built in 1168, but the current Torii is the 8th, constructed in 1875. I walked around the shrine, which was undeniably beautiful, though I was truly most impressed with the external views. 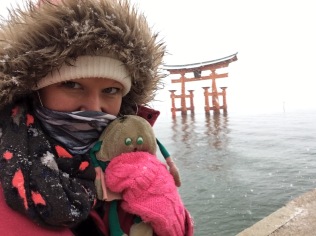 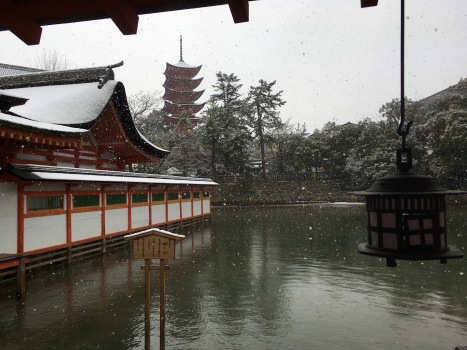 I decided against food now, as I just wanted to move, so fuelling myself on the snacks I’d brought I headed off to visit the Daishoin Temple. 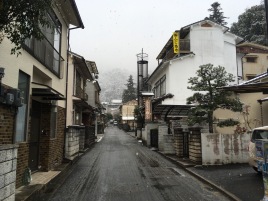 The temple was consecrated in 806, by the Monk Kūkai one of the most famous Japanese monks, the founder of Shingon Buddhism, a major school of Buddhism in Japan.   I’d seen pictures of the temple, home to 500 totally unique Rakan statues (disciples of Buddha) as well as the very cute Jizo statues and was looking forward to taking a few photos with Humpty among them.

What I was not expecting was them to be dressed up in beanies and scarfs. Again, my heart warmed. Each little beanie was snow covered, and when I really looked at the different facial expressions, hand gestures and positions of the statures I couldn’t help but smile and laugh with them.

At the end of the previous day I’d really felt a longing for a quiet prayer space, some time to reflect and just be, and was a little disappointed that I couldn’t sit with my thoughts in the Cathedral.

Standing outside one of the prayer halls, I shut my eyes, listened to the prayers coming through the loudspeaker, and felt the snow land on my face, taking in deep breaths of the icy cold air.  Feeling the pull of the temple, I removed my shoes and went inside and knelt. I’m an atheist but enjoy the serenity and warmth of simple temples and churches, and strongly believe in the connections we have with all around us, and all so seemingly far away. I came out feeling emotionally refreshed, and was beaming. Not only a perfect antidote to the emotionally traumatic day previously, but also to an incredibly manic and full on start to the New Year. I left spinning the prayer wheels, counting my blessings.

I decided I still wanted to get to the top of Mt Misen, so headed towards the Ropeway (cable car) through the tranquil and stunning Momijdani Park. The only other creatures I passed were Deer. I didn’t know I was afraid of deer, but turns out they have a menacing stare.. and a couple of times  I took the longer route round, you know, just in-case they decided to headbutt me. 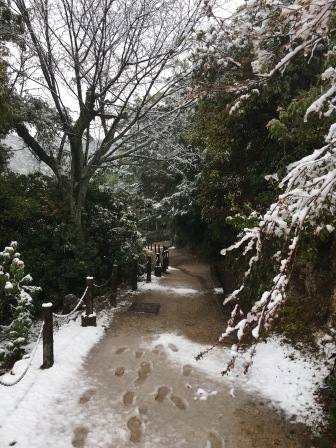 As I approached the Rope Way it dawned on me that I might not like the Rope Way… I’m generally a fan of cable cars, but I’ve become more wary of them, and have never been in one alone, and the thought was daunting.. despite being happy alone on a roller coaster!

As I looked up towards Mt. Misen I couldn’t see the end of the line, and there was no one else in any of the cars. Sat in the cable car, alone, travelling up towards white mist I started to feel very unsettled. Trying to stave off thoughts of high winds blowing my car off the rope and hurtling down the mountain with no one to even see my horrific death, I took out my iPhone, played Khalid’s ‘Silence’ and sang along aloud; 3 times. I also decided now was a good time to put my hair in plaits and attempt to dry out my gloves. Half way up the Mountain you changed cars, the second one being different and described as a ‘Reversible Car.’ I didn’t know what this meant, but I didn’t like the sound of it, picturing the car spinning round. My fears, unsurprisingly were unfounded and I felt so grateful that the second car only ran every 15 minutes, meaning there was a chance of other passengers. Two arrived. Woo hoo! On a less snowy day you would have been able to see a gorgeous view of the mainland and surrounding islands, but not today. 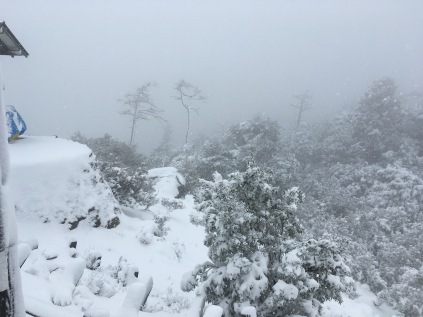 I had planned on a quick walk around the temples once I reached the to, but as soon as I arrived, I discovered they were 10 – 20 minutes walk away and I abandoned this for the more manageable 20 meter walk to the view point, stepping through 15cm of snow. Needing to hold on to the handrails my already wet gloves and hands became totally drenched through. 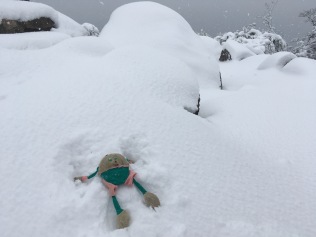 My next plan of action was clear;  1. Sit on my hands on the warm toilet seat for a few minutes, because I could not move them. I don’t mean not move much, but not move them at all. 2. Have a pricey coffee to continue the warming up process inside and out. 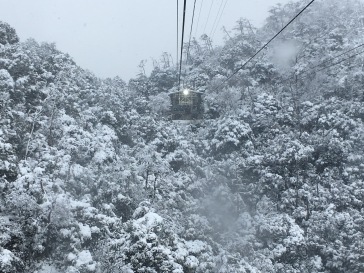 Despite genuinely fearing a panic attack on the way up (being utterly freezing and wet didn’t help much) I loved my little visit to the top and still felt so grateful for the presence of the snow. I really enjoyed the cable cars on the way down, and though I couldn’t see the advertised view, that of the snow capped forest was more than enough for me.

Totally exhausted and frozen I decided it was time to head to the restaurant that I’d read served up an amazing vegan Japanese Feast. Closed. Another disappointed potential customer seemed to be lurking outside… Deciding against waiting another 90 minutes for it to open I jumped on the next ferry back, spending most of my time with my arms in the air, hands above head, defrosting them with the ceiling heater. 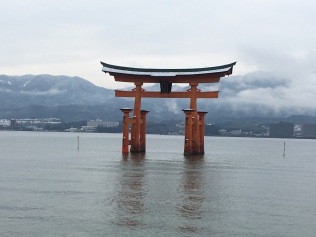 The return street car was an older version and had a super cute vintage look and feel about it. The weather had cleared and I loved seeing the totally different architecture and small houses outside of Hiroshima City Centre.

I was puzzled by the first street car driver, who, every few stops shouted something loudly, and then pointed in front of him. I was desperately trying to work out some links, as it wasn’t at every stop. I made a mental note to ask someone at the Hostel, but when the drivers changed and the second one stayed silent throughout, I was even more confused.  The conductor came to stand at the front every few stops, smiled at the passengers nearby (like me) and then bowed to the other end of the train. All the drivers and conductors in Hiroshima were very smart, and just as I’d heard, there was a lot of bowing.

I also learnt, from the Hostel owner, that in Japan when you point to yourself, you point to your nose. Not a concept I would think I’d find particularly strange, but in practice, and the reason this conversation came about was because both I and an American were confused when he was talking and kept pointing to his nose!

Back in Hiroshima I headed to the Art Cafe ELK for some food. It wasn’t quite open yet, but thankfully they let in cold, wet me. Everything about the Cafe was warm; the temperature, the ambiance, and the people. I ordered the Japanese set with a hot ginger tea, and all was utterly DELICIOUS. Totally stuffed I still couldn’t resist the vegan chocolate cake, possibly the best chocolate cake I’ve ever had; so rich, warm and goo-ey.  The waitress, who had made the cake kept thanking me for my compliments, and I kept thanking her for her, cake. 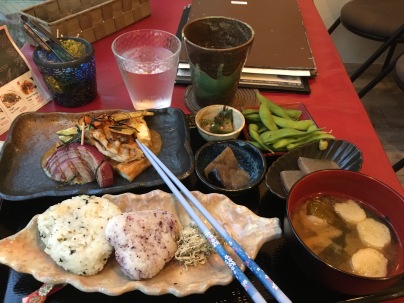 Leaving the cafe I was all the emotions and all the sensations. It was still pretty early, but I was wiped out and so spent the next few hours drinking tea in my shark leggings chatting to some people at the hostel, realising how difficult it is to explain my non-teaching job to non-English speakers. Once myself and another guest, through charades managed to convey the meaning of torture, the next question was asked, ‘YOU TORTURE PEOPLE?!’ Not quite…

I was a little apprehensive about staying in a hostel dorm. I’m used to my own space, and on short weekends away often don’t feel like making the effort to talk to people after a long day of exploring, I feel I should when in the common areas! But, the Hostel was very chilled, saved me a lot of money, and I’m really glad I spoke to the people I did.

My flight was at lunchtime the next day, so after a beautiful morning run around the Peace Park, I ate some breakfast at the hostel (weetabix & with coconut milk (made from powder), my standard bring from home breakfast)  and headed to the Airport. Japan in a sense was very much like I expected it to be, but better. The people, I had been told were friendly, but didn’t realise they would be this warm, helpful and open. The streets were much less confusing that I thought they would be, and the bowing, gestures and smart uniforms I thought would make society feel quite rigid, seemed respectful, but in a very natural, fluid way.

Of course, I was only there two days, and these are just my initial subjective observations, so perhaps not worth much, but my short trip made me really keen to return, and I’m really looking forward to exploring more of Japan. Next stop, Kyoto!