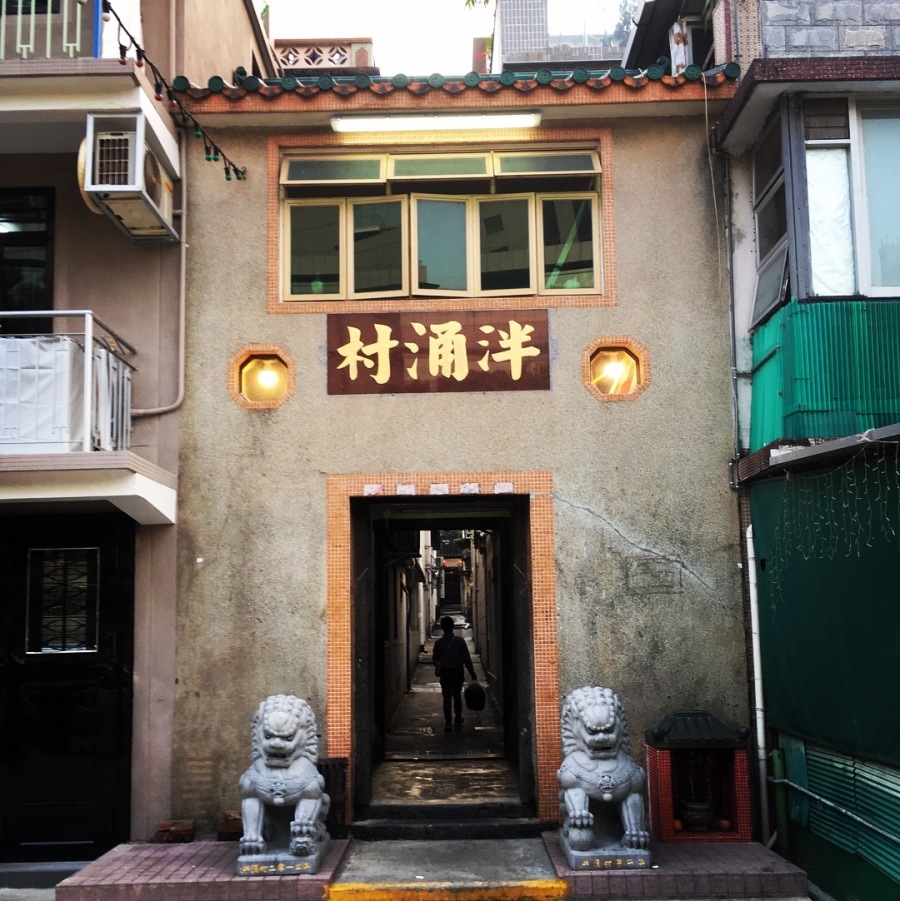 I always knew Tai Po existed as a place, and perhaps I’d been there as a kid, but I can’t remember how it made it on my ‘Hong Kong day trip’ list. Having done it now, I definitely know why it was put on there.

A guided walk around Tai Po Market came on the Meet Up App, but by the time I decided I needed to go, it was full for that Sunday. With hindsight, I’m grateful for this, as I loved going at my own pace and sometimes forget how therapeutic exploring on your own (or without a guided tour) is. So, one mild Sunday afternoon in December, after doing a little googling online and coming across a wonderful post marking the main sites,  I headed out to Tai Po Market Station on the Light Blue (officially, East Rail) Line.

Before heading out of Exit A2, feeling a little hungry, I bought a Taro filled steamed bun. It tasted of the smell of aeroplane food in the 1980s

Heading right into a green tiled tunnel, I walked through the pleasant Wan Tau Kok Playground and up to the ‘Green Hub.’  Before I reached what used to be the Old Tai Po Police Station, I peeked through some locked gates to look at what was the first Government funded primary school in that area (built 1953.) It was this building that the arches (right) were commemorating.

I wasn’t sure what was at the ‘Green Hub’ but it looked open and inviting, so I headed on in. Now owned and run by Kadoorie Farm & Botanic Garden, it is part museum, part community learning & workshop centre, and also has a vegetarian canteen, eco-shop (selling produce from the farm) and guesthouse rooms. (Note: I rented out the meeting room there for a Staff Away day there in June 2018, complete with an afternoon tour of the premises. Everyone loved the tranquil location, with the windows overlooking treetops home to a large flock of egrets, and my (meat eating) colleagues also loved the lunch in the canteen.) 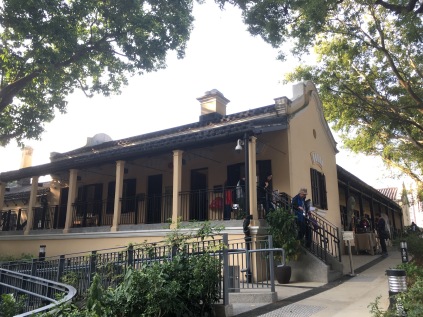 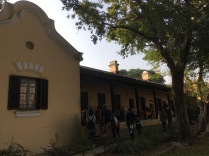 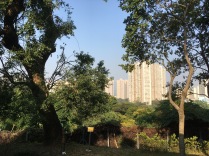 After speaking to one of the staff who excitedly (but briefly) explained the history and present usage of the buildings I had a quick browse at the local craft and goods stalls (before heading into the museum rooms. 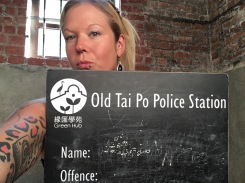 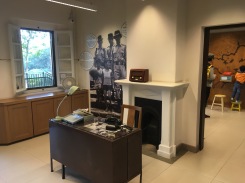 The Tai Po Police Station was built in 1899, the year after the British leased the New Territories from China for 99-years, at the site of the Flag Raising Ceremony on 4th April 1898. It was the first Police Station in the New Territories, and as well as being a functioning station, complete with cells, the Officers were also housed there.  It was a working Police Station until 1987, and after becoming a listed building the following year they started renovating it in 2008, trying to replicate its original state. I thought the museum was fantastic, giving a short but informative overview of the history of the New Territories, its boundaries, and the altercations between the British and the local population, detailing events such as the Six Day War. In April 1899 there was an armed uprising starting with the burning of the masthead by insurgents of the local Punti (Cantonese) Chinese clans. The main reason cited for this was fear of being invaded and wanting to protect their homes and villages. The British forced surrender six days later and entered into what was known as the co-operation policy, which remained in place until the Handover in 1997. The architecture and grounds alone are beautiful enough to make the visit and definitely worth a walk around.

I didn’t realise there was a vegetarian canteen, so being the super prepared vegan I am I’d already brought my lunch with me… dim sum that I’d bought from my local veggie take away, Tin Tin Vegetarian. But, before I headed to a nearby sitting area to eat (and to get bitten) I headed over the road, and up the hill to what used to be an Old Government Administration Office and Local Magistrates Court, built in 1907. It is now a Scout Centre, and I believed it was open to the public to walk around. I’ve since been told this isn’t the case (not sure what the truth actually is..) but as there was some sort of Cub Scout graduation ceremony going on the gates were open and I felt very welcome! The grounds have been used for a few film sets, and it’s a popular spot for Hong Kong pre-wedding photos… you can easily see why. 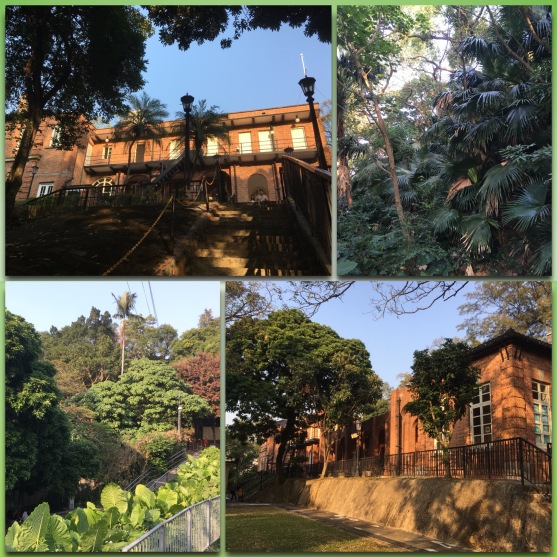 After my food I headed on my way down to Tai Po Market via Kwong Fuk Road. This little stretch was home to some cool, quirky buildings, easily missed if you weren’t paying attention. I’m not exactly sure when these buildings were erected, but the original smaller residences were most likely Government Officials, officers and those working for them. 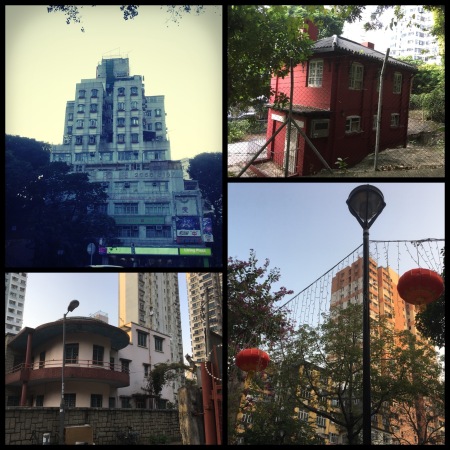 After admiring the lanterns at Tai Ming Lane Square, I headed up to the highlight of the walk, Pan Chung Walled Village. It was just so damn cool, and pretty. I felt a little awkward and intrusive walking around taking photos, but remembering people do the same down my parent’s beautiful muse street in London made me feel a little better. Dramatic arches and narrow alleyways; I felt like I was entering another world. 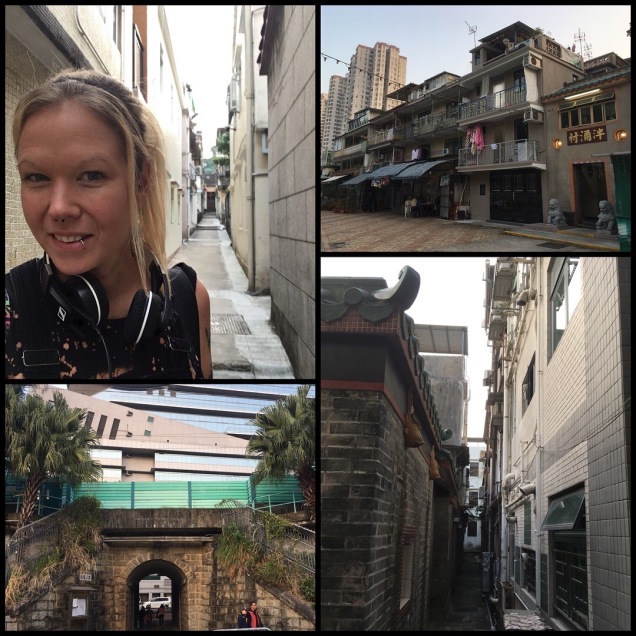 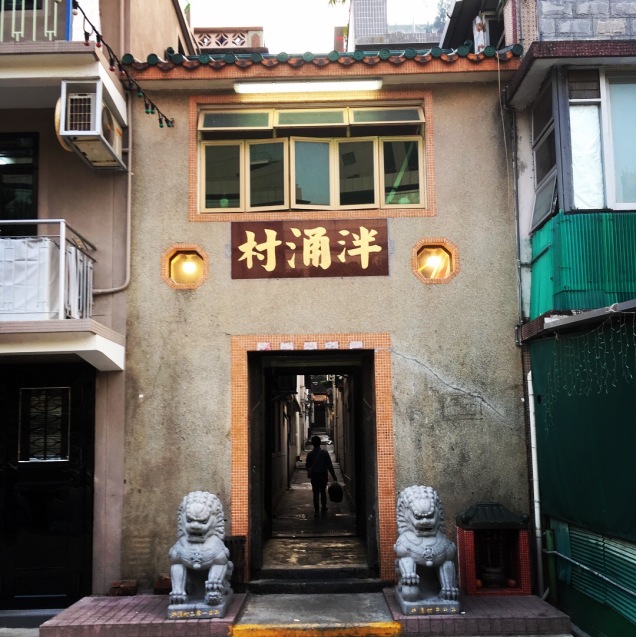 I then headed towards the Hong Kong Railway Museum, walking through what used to be the main Tai Po Market on Fu Shin Street (actually named Tai Wo Market) which was set up in 1892 by an alliance of seven villages, the Tsat Yeuk (七約; “Seven Alliance”) in direct competition to the Tang clan dominated market at Lung Yeuk Tau. There isn’t anything there to distinguish its historical importance, but was interesting to learn about.

The Railway Museum looked pretty cool, but I just felt like walking, and knew I still had a way to go on my Tai Po Market Tour. Still, I stopped and took a few photos, climbed on the tracks, and took a moment to listened to a Chinese Orchestra that were playing in the courtyard. 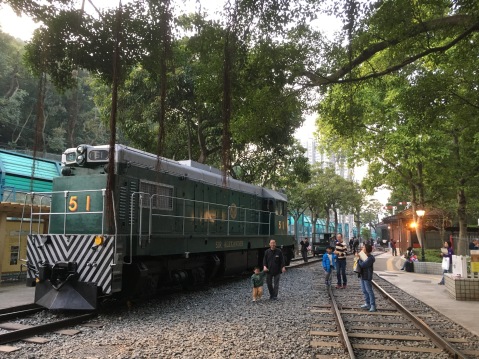 It was starting to get a little darker, which was perfect for the end part of my walk. I cut through Man Mo Temple, which was worth the visit; very smokey, and there was a large American college tour group filming inside, hence no decent enough photos to share!

Tai Po Market is full of shops of all kinds (like any urban areas of Hong Kong) and on my little walk I may have also bought a bright, super soft scarf, a pair of earrings from a beautiful crystal & jewellery store, as well as some household goods (half the price of Tin Hau!) 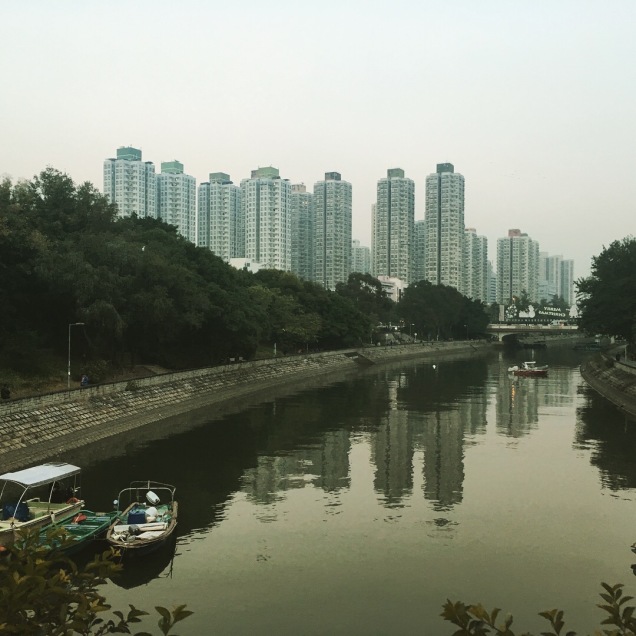 I crossed over the river and headed to the site of the rival Tang Clan market. Again, there is no recognition of this, but I’d read about it whilst planning my walk and knew it was on and around Kau Hui Chik Street. 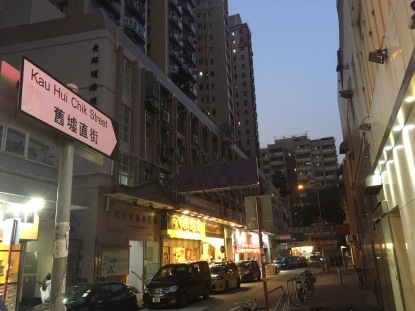 By this point I was starting to get a little weary, and after admiring the Tin Hau Temple for a few minutes and sniffing in the joss stick smells that take me way back to my childhood days, I decided to head back to the river and towards Tai Wo Station. 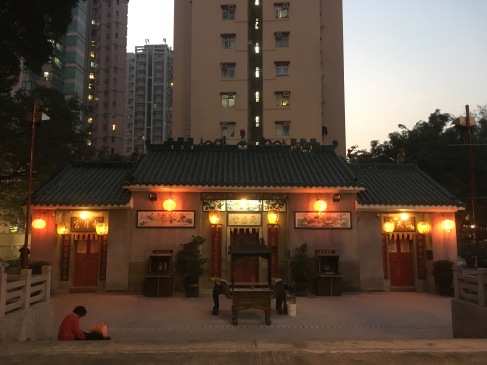 My original plan was to spend some time at the Waterfront, but I hadn’t anticipated such a long (and wonderful) visit at the Green Hub, or the time taken just sitting and standing admiring what was around me. I’d also cycled along that waterfront a few times before, so didn’t feel I was missing out too much.

In case you can’t tell, I loved this walk. I never expected to see so much history, so much diversity and experience so many different parts of Hong Kong history, all in the space of a few hours. I also met, albeit briefly, some super friendly chatty people on the way. There are a few other temples & buildings I’ve left out – go explore for yourself, walk slowly and keep your eyes open, and up!

I’ve said it many times, and I’ll keep saying it – Hong Kong, you never fail to amaze me ❤