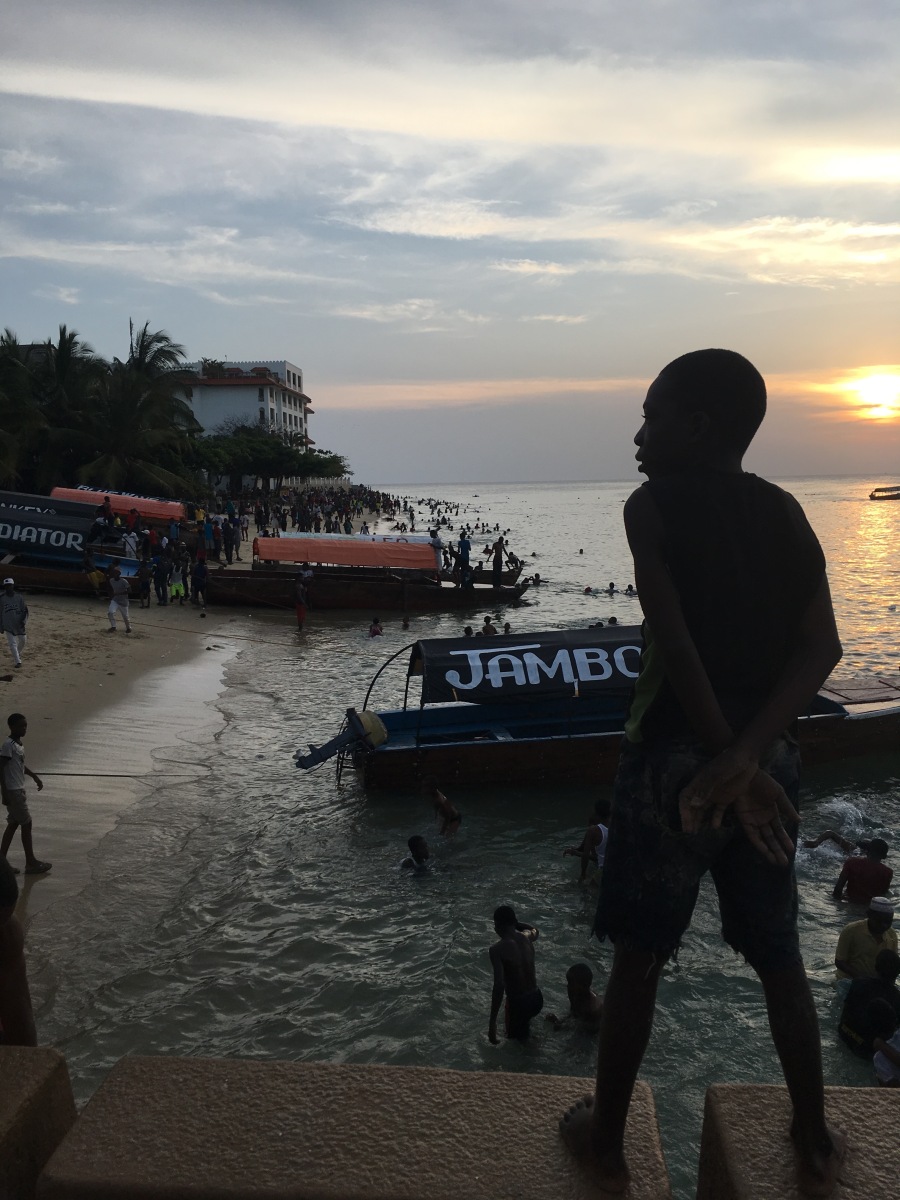 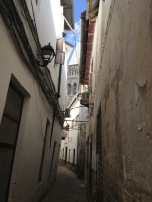 After a sunny breakfast of bread, fruit and coffee at the hotel’s

rooftop restaurant I met my guide, Suleman, from Bike Zanzibar. We headed off on our bikes through Stone Town’s narrow alleyways to catch a Dula (local bus). We chucked our bikes on top and about 30 minutes later were dropped off 1.5k away from the Spice Botanical Gardens.

As someone that puts spices in EVERYTHING it was fascinating finding out where these magical flavours I taste everyday actually come from, and in what form; many seemingly boring and weedy looking plants!

A really fun morning of ‘theory and practical’ (Suleman’s words) spent mostly wrongly guessing what was what. For some reason guessing cardamom correctly led to an outburst of cheers, perhaps due to my rubbish performance so far? I was given a banana leaf cone to put all my pickings in, which felt a little like Halloween trick or treating.

A smelling of the following: ouso plant, ylang ylang, cinnamon (it’s bark!) two types of lemongrass, mint basil, vanilla pods, eucalyptus, something looking like a rambutan, tamarind, cloves, ginger and, nutmeg, which was my absolute my favourite. Had he not cut it open in front of me I might not have believe it was real. (Top right above, nut with bright red swirls!)

A munching of jackfruits, bananas, mangosteins, sweet limes, rambutans, peanuts, some super sour mini cucumber (SUPER sour), peppers…
Plus seeing a few others we didn’t eat such as plantain, the red Mzungo banana, pomelo, cassava (sweet potato) root, avocados, bread fruit, cacao, cashews (out of season) and henna, which surprised me as a green leaf plant! They both seemed to like Humpty and enjoyed getting him ready for his photo-shoot among the avocados and as the Rambutan King. 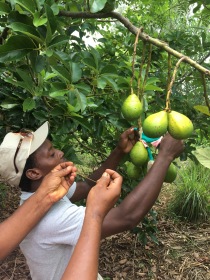 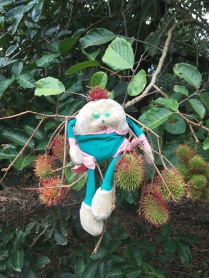 By lunchtime I was absolutely stuffed but still managed to eat an incredibly tasty serving of spiced rice with vegetable curry and a cassava leaf paste.
Afterwards we cycled back to Stone Town through a small forest (NOT Jozani) and saw some Red Colobus Monkeys, which are indigenous to this particular island in Zanzibar. They attempted to move a colony to Pemba, but they all died…

As well as cycling through the beautiful palm trees and ferns, we pedaled quickly, eyes to the front past an army base. Towards the end of our route we passed through villages, and then joined a busy main road, all the while I was quizzing Suleman on his life story and thoughts! Due to recent rains there were areas too bumpy and muddy for me – but great fun and different to my usual flat concrete, grey building cycle commutes through London.  I tend to smile and say Jambo at almost everyone, though many shouted it at me before I got a chance! It feels so heartwarming when someone is staring at you with seemingly cold eyes, but once you say hello, the eyes warm and you get a huge smile and hello back. This is pretty much exclusively a women thing, which sadly I can understand.

Suleman was originally from a village in Pemba, and had moved to Zanzibar City in search of a different life than the one set out for him if he stayed.  Through his hotel work he met the owner of the Bike company – and enrolled in a tour guides college course.  It was pretty great to be stopped by a guy later who quizzed him about how he trained to do what he did and watch Suleman give him advice. Though, whilst this was happening I was off chasing a chicken for a photo. They have really long legs here.  I don’t think he quite understood (or found funny) my comment about it being a model chicken strutting his stuff, so I decided not to stay anything when it did indeed start crossing a road…

He told me more about their day to day life, how they built their houses, that they never worried what was for lunch or dinner as the natural environment around them was a big free supermarket. We talked about the school system and he even updated me on his take of modern politics in Zanzibar. He said at the last election (2015) the opposition leader won, but the present President stated that there was electoral fraud and so another election was held in 2016. Fear tactics were used, and due to that, and people losing faith in the system and feeling that their vote didn’t count, the incumbent party won, and is now still in power.
Suleman told me he had never voted due to his lack of faith in the system, and I said I understood, though I dislike our government and PM I do believe in voting and making my mark and opinions known. We discussed the power of  protest, knowing most of the time it will change nothing, but it shows others, those in solidarity, the world, history, that people did care and disagree. Even if the election was rigged, if everyone didn’t bother voting first time around history would incorrectly show he DID win the popular vote. I said if he ever does vote, to remember me, and how emotional I get when I vote! He promised he would….
It was a really fun, interesting day. I couldn’t have asked for a better guide.
(Note: when in Ngunwe I spoke to a few other people about the election and they said the opposition leader decided not to run again as a stand against fraud, and urged people not to vote… Looking online briefly it’s hard to get a clear picture of what exactly happened whilst trying to work out the system that electorally divides mainland Tanzania and the islands of Zanzibar and figuring out their alliances. From what I could gather there was some violence, scare tactics, especially towards women, a lot of political fraud accusations, and seemingly a desire for change from many, but the second election in March 2016 was won by the incumbent Zanzibar President due to lack of opposition. Read more here) 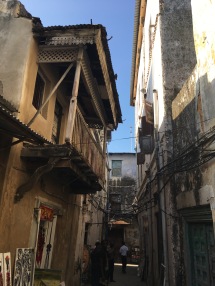 Pretty exhausted & dusty I inquired about a massage place that wasn’t in the fancy 5* hotels and Chris, the lovely receptionist sorted it for me. A 15 min walk away I thought I better factor in another hour for getting lost in the alley ways after realising that I hardly took any photos on my tour yesterday as I was too busy taking in the views with my actual eyes.  En route I took a sad selfie with the sea behind as I was desperate to go in it, but couldn’t really leave my bag alone, when I spotted some older lady tourists swimming in front of a hotel. I asked the waiter if I bought a drink could I leave my bag on a table near him so I could quickly dip in the water (of course I had my bikini in my bag.. no towel though..) He said not to worry, no drink needed and put my bag in his bar area and I could even see it from the water.
There is no feeling that beats the first dive underwater in the sea! Floating, paddling, swimming, just being in the sea and taking in my surroundings. Nothing beats that. I loved that guy. I think he got that through my insanely enthusiastic cries of ‘thank you – thank you thank you – I am the happiest person in the world right now.’ (a direct quote) 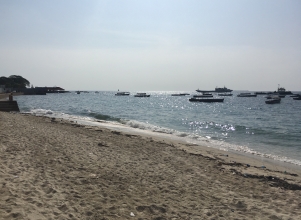 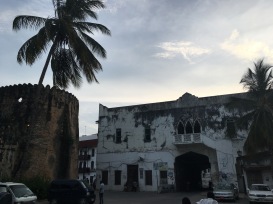 My plan of drying out instantly in the sun failed and dripping wet walking through the alley ways I found the spa with a little unwanted help from a local. He did managed to get 2000 shillings off me in the end – I figured I’d feel more guilty for getting annoyed at him and not giving him money than the other way round. When I said to him I don’t mean to be rude, but when I, as a single women traveler tell a man consistently I don’t need their help it can feel a little aggressive when they continue to follow me. He seemed a little shocked, and said ‘sorry, no no no, don’t worry you are safe here!’  but still wanted money…
The massage was, surprise, surprise, incredible. An oasis of peaceful quiet with beautiful spice smells, my masseuse was a blind lady named Aisha, and was one of the best I’ve ever had. 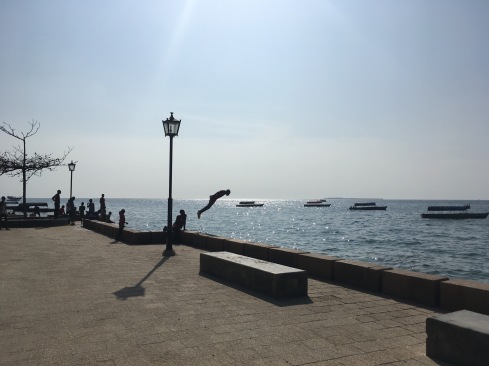 Totally blissed out feeling, and probably looking, stoned I went and watched the boys and men jumping into the sea. Part of this was wonderful, watching the stupidity, the jokes, the fun being had with the sun going down in the background. A people watchers dream.  But part of it made me very sad that this was clearly only for the male sex. Perhaps no local women or girls had any interest in sunset swims and peer jumping. Perhaps. But there was me two hours before, in the same spot, feeling utterly at peace and at one with the world, diving under water, doing my favourite thing, thanks to an incredibly kind man, just being in that sea, and now, I could not spot one woman or girl in an ocean full of men.

It’s not for me to tell people they have to want to live a life the way I think it should be able to be lived, but I find it impossible to accept that 50% of the population cannot do something because of their gender. I tried to think of something, somewhere that it was the other way round, and maybe there is, I just don’t know. (And, of course that still wouldn’t be okay.) Still, I want to emphasis that women here are working, out and about, both sexes interact easily…

I decided I needed another sesame bread and went to try and find Jamo who I got my dinner from the night before. When I told the people at the stall I was looking for someone they didn’t believe me, but he wasn’t there so I walked off to take pictures of cats. Some guy behind me starting going ‘Hey Rafiki, you like the cats eh?’ and turned round to see him. He didn’t believe me when I told him I’d just tried to go and find him, but when his mate backed me up, he looked utterly shocked and happy and we chatted away whilst he heated up and munched my bread.

Today was all about the little things being the huge things. The small acts of kindness and warmth, filling my heart and soul, the laughs, the swapping of stories. Huge, huge smiles given from me, given to me.