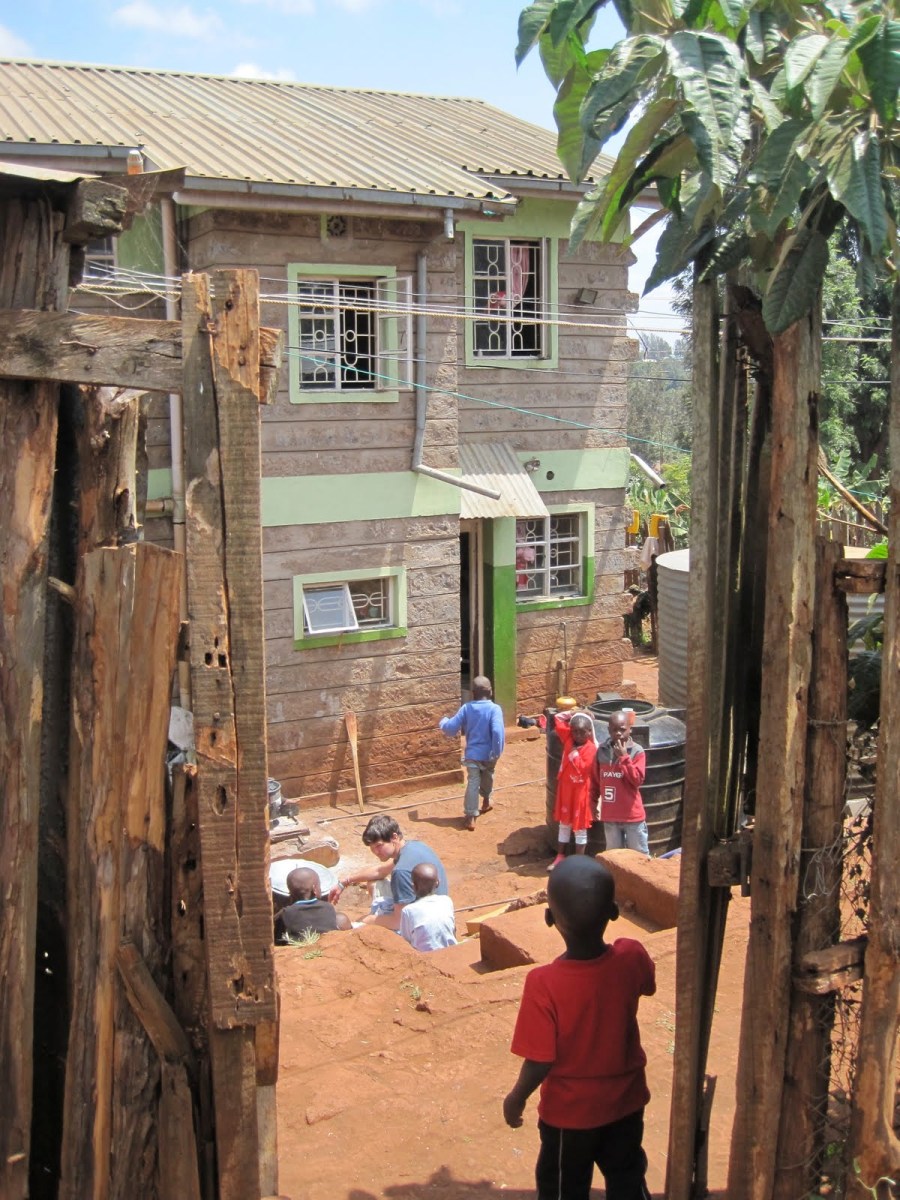 The induction reminded me a lot of Uni, rather than boarding school – everyone being friendly, in the same position with a mix of backgrounds, expectations and ages. Consisted mainly of teaching is a bit about Kenya (briefly brushed over the  ‘fact’ there was no civil war in Kenya, though neighbours did kill each other with machetes after the 2007 elections), and what to expect from our placements and what not to do at our hosts (have sex, turn up drunk and sing at 2am, etc…) We were also told how homosexuality was an abomination in Kenya and did not happen. However, I did pick up a paper a few days later with an article entitled, “Muslim threat to disrupt Aids seminar over gays:, with the picture caption stating,  ‘WARNING: Special Programmes minister Esther Murungi with some of the gays at the Mombasa seminar.’ Ended up signing up to a load of things (like Uni Societies…) though have already not turned up to one (like Uni Societies?)

Met my roommate-to-be Trush, England born, moved to the US, and now a New Yorker, also veggie, likes her beers and smokes.. occasionally. Oh, and likes documentaries. Pretty good match! After hours of waiting ended up in a flat in God knows where – behind some security gates, on the side of a really busy road. But with a lovely lady called Jane, with one 14-year-old son, constantly studying for his exams, and also her 14-year-old Albino nephew, Simon, who was staying for the weekend. Albinos in certain parts of Africa are sought after by witchdoctors thinking they contain special powers and are often left limbless (or dead) because of this. Jane also said they are sometimes referred to as ‘millions’ because of how much they are worth. In fact, since we’ve been here there has been a case of ‘medical negligence’ on the news… 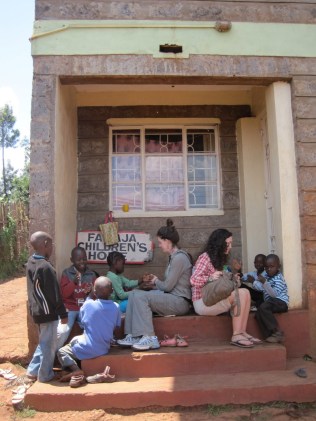 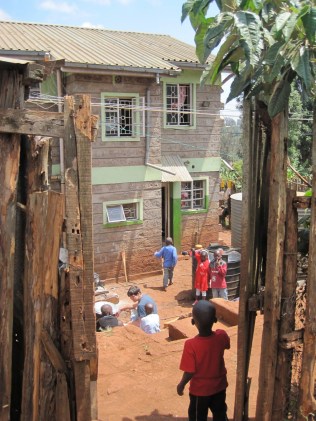 One ‘excursion’ I did go on was to the Faraja Orphanage Tunva Children’s home in the Ngong Hills. The purpose of the trip was to raise awareness regarding HIV and Women’s empowerment in regards to saying no, what is appropriate and how to respect yourself and what to do if you are raped or abused. The first home housed 35 orphans and was run by a lady they called Mama.

The second home housed approximately 120 children and had only recently been built, as the original house (that is still there with 200 children) is in the Kibera slums.When I got there I read a plaque on the wall saying it had been built in honour of a 17 year old Irish girl. Out of nowhere I felt myself choke and tears start to fall, thinking about Amber and how in Malawi somewhere there is a plaque on the side of a school in her memory. I suppose thinking about it she has appeared in my thoughts a lot recently, being here, and with her sister’s marriage here next year. I wasn’t sad for me, but for her, the loss, the waste, her family, and her friends, especially my best friend, who I know still misses her like crazy. But I’m glad,  she has not been forgotten and she deserves the tears and the memories – … xxxxx RIP Amber xxxxx 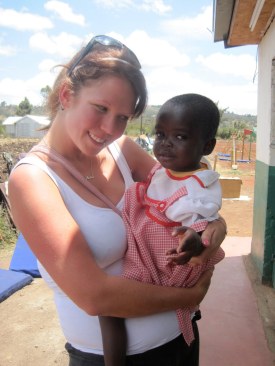 I took to a young girl Metrine; sitting alone outside on a plastic chair who I found out had been abandoned and left to fend for herself for about a month. She was very small for her age (roughly four) and couldn’t walk, and didn’t talk – though she could obviously understand. After about 20 minutes I managed to get small reactions from her, and as the time went on she seemed happy in my company and we had some fun. During lunch the obsession and protection of her food was clear, and the power at which she smacked the kid (baby goat, rather than child) round the head with her spoon surprised me considering her docile nature.  I also helped out with the dishing out of lunch. I was told off that the first bowl was far too generous and then left…  so I cut down my portions. I figured the girls I was serving were just moody because of me being a Mzungo, but turns out it was because I was stingy. Impossible to please matron type (“half a spoon…” so I gave them ¾’s… “no, that is far too little…”) watching over me, and so I just gave them too much. Any one that has ordered a ‘veggie delite’ at Subway will start to understand their frustration (and I do understand the huge difference, note I said ‘start’).

It seemed well run, obviously fairly bare, but clean, spacious and adequate with a mix of over-loving staff, and the necessary matrons. The younger kids seemed to enjoy dancing for us,  (I’ve seen enough day trip tribal dances to see when people hate or love what they are doing) especially the 18 month old getting down with them.. . quite a site. 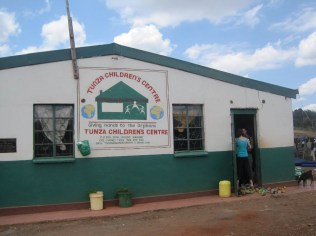 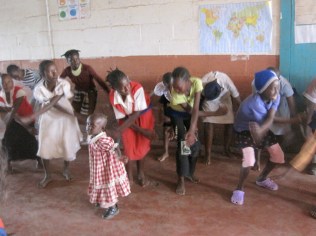 My only issue was the song they were made to sing at the end, about how it pained them in their hearts to see us go. Up until then, it was nice being there – teaching, interacting, helping out, just messing around… but really, that song could not have lacked any more emotion (quite rightly, we’d been there for five hours). Made up for by a Black volunteer from New York telling them she was from the US… a disbelieved gasp followed by hysterical laughter that the Black girl was not African!

Crammed Matatu home being used as a seat by a little boy with friendly Kenyan conversation… all for 10 pence. Really excited to eat my 7p street side grilled corn when I noticed I was being stared at by two little girls. So I went over and started to chat, realising all they wanted was my corn… too far away from the stand to buy them their own, before you call me stingy… though stingy enough not to give them all of it. I was hungry!

Ended up having dinner in  the expat part of town, Westlands, at a fancy Indian restaurant, Habdees. Then for beers at an expat bar, Havana, that reminded me of Hong Kong. Chatting to two NGO workers (one from CAFOD, the other I couldn’t really understand – he was wasted). The latter being immediately sarcastic, and self righteous as soon as we told him what we were doing in Kenya. After I gave him a bit of an ear bashing for being such a self important ignorant arsehole we seemed to get on better. He was actually a really decent guy once we started chatting normally, but that initial reaction is one that I see in far too many charity workers, considering what they have supposedly set out to do.  I’m under no pretence that this is some life changing holiday for others (that I meet), but hoping to have fun, help out a little bit, and really be educated. Media charity and poverty saturation mean it’s hard to know what’s real and what’s not and what really is the best way forward. That, and I like to see new places. Again, under no pretence. I feel very uncomfortable when people telling me I am doing a great thing (and a lot of people do, you may be surprised to know) because it’s also great for me. Teaching kids, new country, a culture I don’t know too much about, pushing myself a bit – nothing to be congratulated about!