Uneventful flight to Nairobi (aside from the lady next to me elbowing me all the time.. perhaps the reason why I took a diazepam?) A little tipsy and watched a film on Joan Jett and the Runaways before passing out to Shrek 3 (or 4). Woke up pretty dazed… which was quite fun considering I had no idea what I was doing going through customs and vaguely remember feeling like some sort of spy. Got a cab to our family friends house, which is actually in a school. Beautiful house, spacious, hammocks, with the garden merging with the school playing fields. After a nap my time was taken with their two children; 1 and nearly 4. Beautiful cute girls. Met Dan and Becca later; both fantastic and friendly – more so than I could have hoped for. Ended up getting Chinese takeaway (see what I mean!) and had a few beers, whilst shooting the shit and quizzing them on Kenyan life. 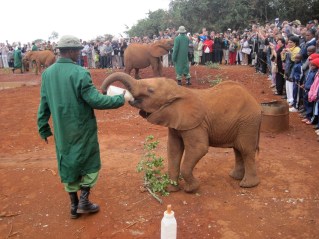 Next day went to see the baby orphaned elephants and black rhinos at the David Sheldrick Wifelife Trust. (http://www.sheldrickwildlifetrust.org) (Which has recently appeared in the IMAX ‘Born to Be Wild’ film – which I would recommend).

Obviously it’s sad why they were orphaned (poaching, human conflict, drought, etc) but at least there is a place like this, with the purpose to realise them into the wild, and gosh darnnit they were cute. As were all the school kids that had been brought to see them – I figured it was going to be a good month. Then I headed off to the Rothschild giraffe centre and got to feed giraffes. Wow. With their big slimy tongues and their cute heads and their big necks (really I hear you cry?) So so cute. Not something I ever thought I would do. Just wow. Lucky lucky Weeze. I think I was more nervous about this trip that I liked to let on.. being a seasoned traveller and all. But I didn’t know what to expect, or who I’d be staying with and so far I’m having a great time and feeling positive about my ability (and love for) interacting with kids (also spent this afternoon in the playground – exercising off my lunch of leftover Chinese!) I know I’m only away for a month, but I feel that I needed to push myself, at least in terms of independence and I’ve always wanted to work in an orphanage in Africa. 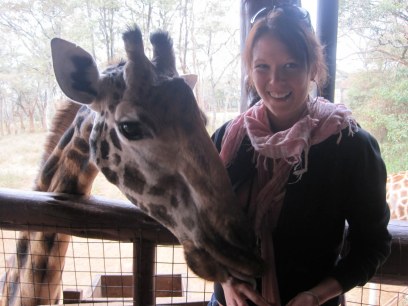 It’s a shame it’s for such a short time (perhaps that thought will change as I don’t start for a few days…) but it’s a taster… and it’s all I can do at the moment. I like that I’ve thrown myself into something without having a clue what to expect. And I’m loving it. I hope this doesn’t sound self-congratulatory. It’s not. I’m just very happy. Happy as well that this time last year I was only starting to feel a teeny bit more like me and less anxious and claustrophobic but still couldn’t imagine doing this, as it petrified me. Jebus, even being at a gig or any closed room made very very uncomfortable for the better part of a year. And here I am happy and excited about the next few weeks. The support from my friends and family, Mum and Si, seems to have worked. As well as me unwilling to crumble underneath my stupid thoughts and persevere. Seems it was all worth it.

Spent the next few days having a great time enjoying the hammocks, playing with the kids and even ended up staying an extra night after turning up to the Guest House and seeing no one else was there… or due to be until the next day…  Dan had driven me there (it felt so much like I was going to Boarding School.. what would it be like, where the people nice, would my host (housemaster) be nice…?) Thankfully he took pity on me and I ended up going to a BBQ at one of the other teacher’s houses drinking beer and playing table football (at which I suck royally). 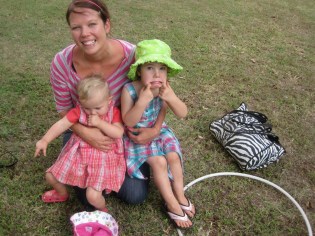