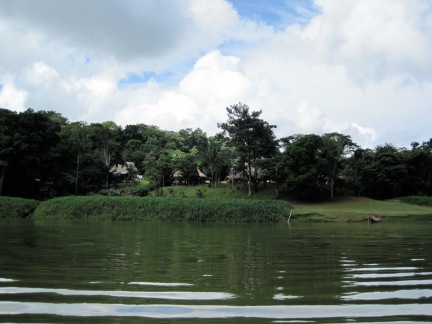 On the second day we went to a village of the Embera Tribe in Lake Gatun, just an hour outside of Panama City. 10% of Panamanians are indigenous tribesmen/women, the Embera being one of seven, who originated in the San Blas Archipelago (better known for the home of the Kuna). Our tour guide Anne was originally from Seattle and was on a movie set seven years ago as an Animal Trainer when she fell in love with the Embera, and more specifically the man who is now here husband. Though some of the Embera go to school or University in Panama City most will return to their village; Anne’s husband being one of the exceptions who prefers the city life. These villages are in a national park and feel days away from the Panama City, not the short drive they are. We took a dugout canoe towards the village, stopping off first for a short trek for a swim in a waterfall – passing caiman, howler monkeys and a lotta lotta birds.

For the Embera the ‘village’ concept was new as they usually lived in family units 10 – 15 minutes canoe apart. The Government will only provide a primary school for a ‘village’ and so the villages sprung up. Though they have lived in this area for approximately 40 years, the National Park was formed in 1984, which stopped them from fishing or hunting commercially, so tourism has become a primary source of income. We dined on Pescado and fried plantain wrapped in Pandanas Leaf; Panamanian fish and chips? The tourism hasn’t really changed a great deal about village life, and much of it was off limits – we were shown how they make their produce, visited the school, the communal kitchen and some shown dances. Living quarters were as you would expect; simple, clean wooden houses on stilts. There are however some Embera tribes that still live completely isolated in the park and will not even interact with the Embera that are open to the Western world. I was told that the ‘Ombora’ beaded skirts were only worn for special occasions, thinking she meant they normally wear western clothes… but Anne actually meant they usually just wear the loincloths!

Day 3 was canal day when we headed up to the Miraflores lock. Personally did not expect to find this as cool as it was! Watching the huge ships go from one section to the other and being pulled along was just incredible! Bonus that the first ship we saw was from Hong Kong with the Bauhinia flag flying in the wind. Si of course loved this. The history of the Canal was also fascinating; with the idea first being brought up in the 1500s (it was completed in 1914) – the fighting for the rights to the canal, with the US obtaining it because the French could not complete it (I’ve heard different reasons why – money, disease, disinterest??!?) Also interesting was that the US bought the rights to construct a canal in Nicaragua with no intention of doing so, but to make sure that the Panama Canal was the only one in the Central America isthmus.

Afterwards we got a Diablo Rojo (known in the rest of Central America as Chicken Buses) but named so in Panama as all individually owned, so the drivers race each other to get the bus stops and also pimp them up in order to entice people on to theirs using neon lights, flashing boards, music, graffiti, etc. Then had to hop on a night bus to Bocas Del Toro via Almirante. Si was upset that a bringing alcohol on board was a criminal offence. Also odd to see someone get on wearing an Equifax jacket!

Bus was FREEZING, but otherwise comfortable. I also have a very nice boyfriend who leant me his hoodie (me: 3 hoodies, leggings long socks, scarf wrapped ALL round face with eyes covered with those night sleeping things… Si: 1 hoodie and shorts..) Oh, and the whistling man at 2am. I thought fine, one song, that’s cool…. trying to keep calm about it (I get almost autistically fixated on noises/lights, etc) but then the most whistle-happy song ever written came on (Wind of Change by the Scorpions … if you were unsure). Thank god for earplugs.