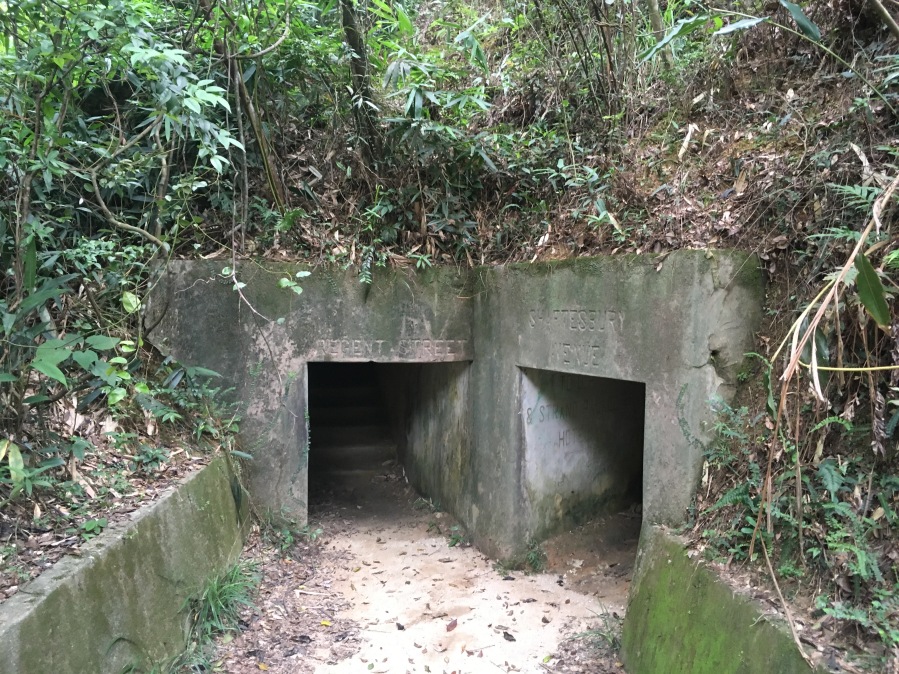 Imagine walking around every day feeling overwhelmingly in love with your surroundings. Every-single-day. Feeling unable to open your eyes wide enough to take it all in, trying to open your heart as much as possible, somehow hoping to capture the experience, the emotions – remember every little thing you are seeing, you are feeling. This is what life in Hong Kong was like for me for the last two years. It was wonderfully, emotionally exhausting!

It wasn’t just the obvious natural beauty –  but everything. So much of what I saw awoke vivid memories from my childhood and teen years – seemingly mundane things like storm drains, marble floors (okay, not so mundane but very Hong Kong!) and concrete hills cracked by the roots of huge banyan trees. Flashbacks, especially in the first six months happened almost every day; thinking I’d not been to a place before but then BAM there it was – a clear, powerful, memory appearing from the depths of my mind and heart. My eyes welled up a lot, just overcome with emotion. 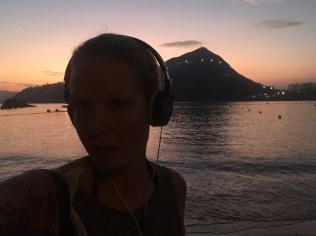 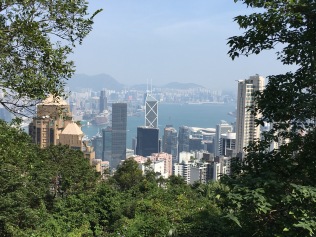 There was also so much new beauty to take in – sometimes because it was new to me, or because it used to be so normal, I never really noticed it before –  like the pastels of the buildings, the Buddhist offerings being burnt on the street in the large metal drums, the quirkiness of the morning exercise regimes. I lived in a more normal area, I met such a wide range of people – smiling at their stares often led to huge smiles back, even conversations.. It all filled my heart with joy, and I felt so spiritually connected to everything – the concrete, the sand, the birds, the buildings, the trams, the sky, the water… all that was natural, and all that was man made. 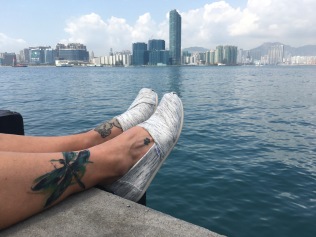 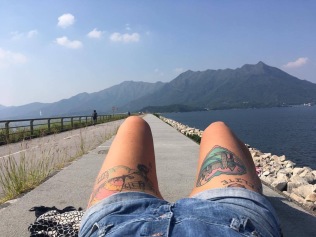 So when people ask where I am from – 100%, I am from Hong Kong. You can argue about my ethnicity, my citizenship, my passports, how I look, what languages I speak, but oh – there is only one answer for me, I am FROM Hong Kong. It is where my soul was born and where it will always be. 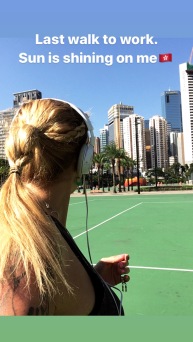 But, amongst these daily amazing days – walking through Victoria Park every morning looking at the sky, the trees around me, taking huge breaths (even the humid ones, sometimes especially the super muggy humid ones) and feeling so unbelievably grateful to be back there, even when I was having a shitty day – I still had my favourite, favourites days….

Waking up on a Saturday morning last August, a few months into the Hong Kong protests I knew that I NEEDED to get out into the countryside that weekend and just breathe. I text my mate B asking if she was free the next day to explore the WWII Tunnels, my number one ‘to-do,’ but I did not want to go alone. Her glorious unexpected response was that she couldn’t tomorrow – but was free that afternoon! So, after a few hours at my part time job singing jolly phonic songs later, we met at Tsuen Wan MTR (Exit B1) and took the #82  mini bus on Shui Wo Street, getting off at Shing Mun Reservoir. 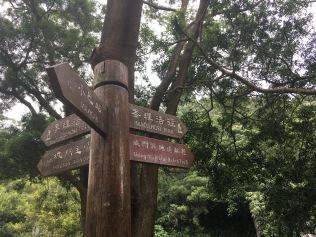 I was beyond excited – hiking, a best buddy and WWII History. I needed some escapism and this was the best, best kind. From the moment we got off the bus my heavy heart started to lighten. Turning right from the Ancient Gate towards the BBQ area we were instantly greeted by huge, gorgeous Banyan trees covered in Macaques monkeys! These monkeys are not native to Hong Kong, but were brought over circa 1900, and it’s been said that the release into the wild was in order to eat toxic plants and fruits believed would poison the water supply around Kowloon Reservoir. You can find more about them here: Hong Wrong 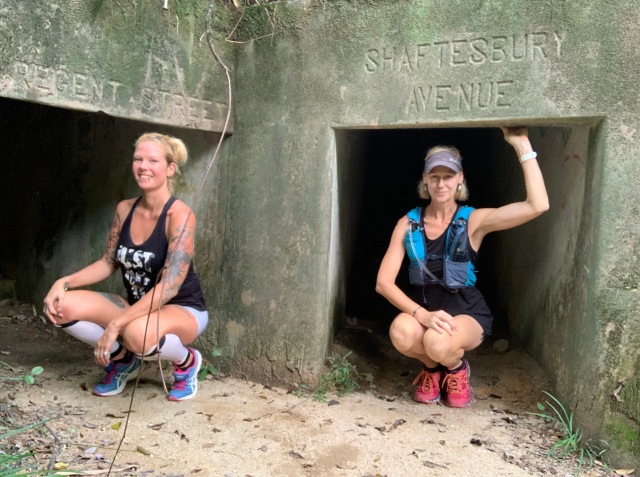 We only had to walk a little further, perhaps ten minutes on to the Maclahose Trail (section 6) before we came up to the Tunnels, part of the Gin Drinkers Line. This was an 18km defensive line built pre World War II (late 1930’s) in case of invasion by the Japanese. Well known English place names were given to various sections and parts of the line. 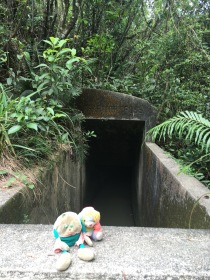 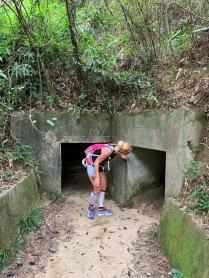 The Japanese launched an assault on the 8th December 1941, and despite expecting to be able to hold them off for three weeks, it was only three days later the Japanese had taken the area. This was said to be due to an insufficient number of troops with almost no training against a highly skilled and prepared Japanese army.  I’ve been unable to find the death toll of this area, but was told that there were fatalities, and the remains were never given a proper burial – but in fact found by the volunteer preservation group who supposedly threw them into the nearby hills.  I have tried, but I can’t verify whether this is true or not!

Hong Kong was surrendered to the Japanese on 25th Dec 1941 and remained under occupation until 30th Aug 1945, with some notoriously brutal POW camps.  The Hong Kong Government has done little to preserve any World War II relics, perhaps because it was under colonial rule at the time, or because it was occupied so quickly and easily – maybe not something they feel should be remembered – more of a humiliation. However all over Hong Kong you can still find remnants of WWII, largely neglected and abandoned – some in surprisingly good condition given the humid climate, typhoons & incredibly fast growing plant life.

British, Indian (including soldiers from what is now Pakistan), Canadians and locally-raised troops fought for Hong Kong. There are around 5800 people buried in the Commonwealth War Graves Cemeteries in Hong Kong – including 600 unidentified men and women. I really recommend visiting Sai Wan Ho Cemetery towards Chai Wan.

B and I spent the next thirty minutes exploring the redoubt (definitely take a torch) made up of underground tunnels, trenches, observations posts and pillboxes. It was seriously impressive. I didn’t realise how complex the tunnels would be thinking there was just one to go through! We couldn’t explore them all as some of the tunnels were quite waterlogged even though the weather had been fairly dry recently. I’d been told not to go there after, or during heavy rain.

Walking through the redoubt- the combination of the sunlight illuminating the dark rooms and the heavy overgrowth was just beautiful in that way that thoughtful melancholy way abandoned buildings can be.

The ‘no playing war games’ sign reminded me of the kids at my apartment block growing up that used to do just that with BB Guns, dressed up in full combat gear, with mesh goggles on.. looking back it’s a bit strange – and stranger still that it was allowed to happen, but at the time it was normal!

After exploring we continued on and spent the next hour enjoying the greenery, the towering trees, the butterflies… the views.. and the animals! Oh the animals!! Families of monkeys everywhere; babies, teens, adults, grandparents.. oh so cute, but sometimes a little scary too! I was happy to be with B, who spends so much more time out on the trails, and with wild monkeys than I do! It was amazing to observe them calling each other then moving in response to these calls – usually due to the arrival of a car, or truck with food!

When we finally got to the main road (and decided to go eat vegan hot dogs) I was deliriously happy. I had such high expectations.. but again, Hong Kong, you surpassed them! I couldn’t have had a better tour guide – nattering away about the world, teaching me about the sites, and keeping me safe.., the afternoon was just perfect.

Can I have one favourite day out of an incredible two years? No, probably not – but whenever I hear the word ‘favourite’ I think of that afternoon out on the hills exploring – so I guess that’s something pretty special.. 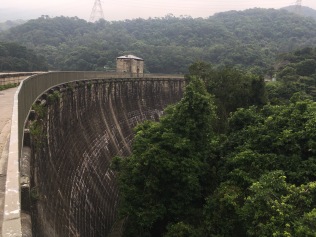