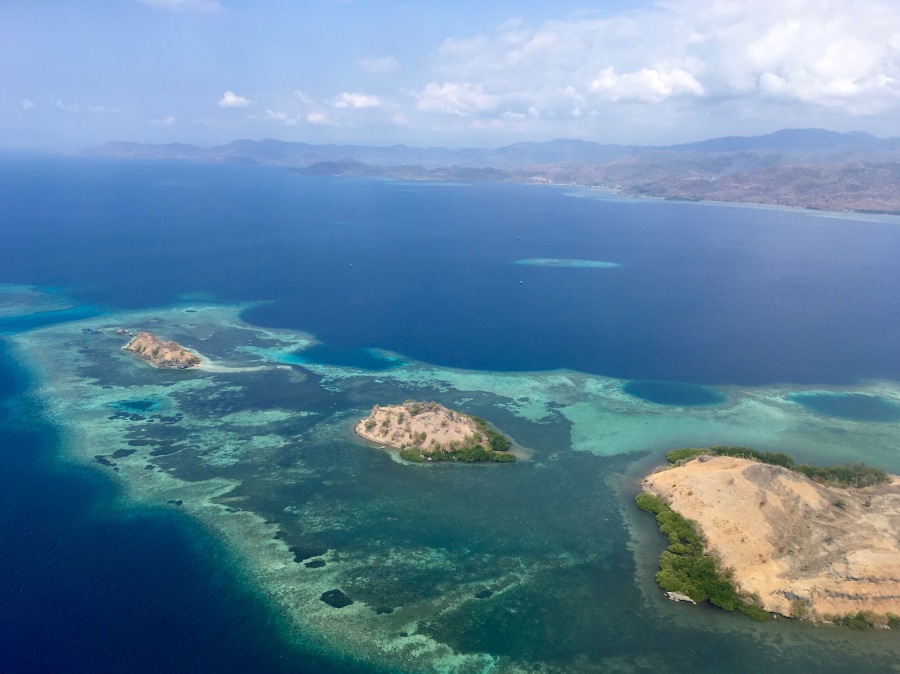 Komodo is know for its crazy strong currents. So, despite wanting to go, due to my fear of strong currents I never thought I would. But incredible pictures kept popping up on my feeds; not just of the underwater life, but the surrounding islands too. Girls That Scuba hosted a liveaboard there, and it seemed you could even get Open Water Certified there.. so all the diving couldn’t be that crazy or difficult surely?

Researching more I thought, I’ll just go when the currents are weaker (i.e not full moon.) But the week I could go, or had decided I wanted to go, using the HK public holidays at the end of September, happened to be over full moon. Being stubborn, as now my heart was set on it I thought ‘ahh screw it’ and booked the flights anyway.

I spent a while deciding whether I wanted to do numerous day trips, or a liveaboard, but knew deep down it was always a liveaboard; I was just scared. I’m not the biggest fan of hostels/dorms, because I like to have my own space at the end of a day (but still book them, because of the cost), and thought this would be like that – but on a boat, even more confined. But, the pros definitely outweighed the cons; dive, sleep, eat, dive, sleep, eat.. and given how friendly and chilled I find the dive community I thought I just had to go for it. 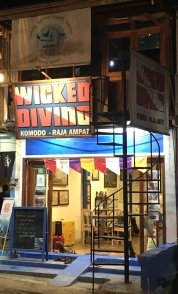 I spent a lot of time researching different liveaboard companies, so when I actually walked down the main street that all the dive centres (as well as cafes, restaurants and shops) are situated on, I recognised pretty much all of them! I eventually chose Wicked Diving predominately because of their sustainable diving ethos and community projects. A percentage of each booking goes to fund training for local school leavers to become Dive Masters, and each year Wicked Diving visit schools to present their different projects and encourage applications. They also run Wicked Adventures which runs trekking & kayaking tours; trainees are taken on for these too. 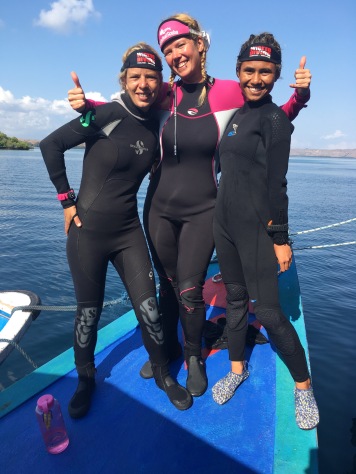 Two of the (female) DM’s on the boat went through this program, and just like on land, I love being guided by local people from the area I’m in. There’s no expectation for the trainees to stay on with Wicked Diving for years after, and everywhere I went people seemed to know the organisation and someone that had worked through, or with them; you could really see the positive impact they were having. They are also affiliated with Sea Shepard (the first in Indonesia) and don’t serve seafood. My vegan requirements were not only not an issue at all, but I was served awesome tempeh & tofu meals daily! And of course I’d taken into account reviews of their equipment, professionalism, etc, too.

The liveaboard was 4 days/3 nights; 9 dives and a visit on-land to see the Dragons. I booked the flights before the trip so had a day to play with before, which worked out perfectly. I’d been recommended Blue Marlin Dive by a trustworthy friend (and all other online reviews backed them up) and they offered day trips on a boat that went to some of the easier sights. A perfect way to ease myself back into the water and calm the mind, switch off the Hong Kong/work/daily life/on overdrive mode which normally takes at least the first dive.

So I left Hong Kong on a Saturday afternoon, a little nervous but very excited. Embarrassingly when I checked in I didn’t actually know where I was going. Probably not the best impression to give as a young(ish) solo traveller to Indonesia! I knew I was going to Komodo National Park, but the airport is actually Labuan Banjo, on the island of Flores! Thankfully the check in guy had never heard of it either, so I felt a little less dumb! I flew Garuda Airlines, named after the Buddhist/Hindu/Jain holy bird, which I didn’t find out until my return to HK when my Yoga teacher (and friend) showed me the wall hanging/statue they have in the yoga studio I go too! Fate eh?

I had a 13 hour layover in Jakarta so booked a hotel by the airport with a free shuttle service. As I’d spent the flight watching movies and eating snacks I just slept the whole time, waking ready and super excited to fly (breakfasting on oreos and black coffee.. standard.)

The plane had 2-2 seating and I had two to myself! I always have to book aisle seats, so was hugely excited by this, knowing the views on landing would be amazing. I was not at all disappointed, happy-swore a lot to myself, and even managed to spot a dolphin and a turtle from the plane. (Seriously!)

I chose Dragon Dive Hostel because it had a pool and was located 5 minutes walk from the main street. But mainly because it had a pool. The decor was super cute, the staff really friendly and helpful, decent showers & toilets, but the room itself was a bit lacking (creaky beds, no where to put anything, super bright lights but no curtains and if you were on the top bed it was right above your head) but.. I’d probably stay there again.. because, it had a pool and a really nice chill out area.

I headed up to both dive centres to check in and scope the place out, looking for somewhere to eat, and have a massage later. En route I passed  Catur’z Kopi Klub a veggie (& vegan friendly) restaurant, and on the way back booked in a full body massage. Quick swim before doing both, then bed. Good times! 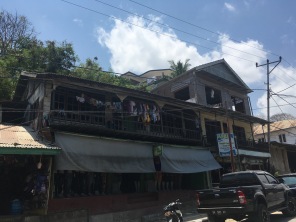 I woke up super early ready for my days diving and after eating some breakfast (toast & jam) at a nearby cafe, headed to Blue Marlin. The cafe sold vegan muesli and nut milk, but I was there too early… shame considering I also turned up at Blue Marlin an hour early. At least the views were gorgeous and a great spot to chill & have a coffee.

The first day was perfect. It took about an hour to get to Siaba Besar and the water conditions were easy, but with a little bit of current, which made me happy. The water was warm, 27/28*C and there was tonnes to see, including the biggest moray eel, by at  about double, I have ever seen. I didn’t know wtf it was at first! A monster moray!

All the other divers onboard were completing their Open Water Course, so I was buddied with a DMT (Dive Master Trainee) David, and was in fact his first guidee! (He did good, very good!) Turtles, yellow spotted rays, boxfish, cowfish, an Indian walkman, triggers, puffers, sweetlips, unicornfish, clownfish, bannerfish, butterflyfish.. all the fish! So peaceful and towards the end of the dive the calm kicked in. Ahh. Bliss.

The second dive was at Mauan (meaning beautiful in Bahasa) and a spot known for Manta Rays. You can never be certain of anything under the water, so I was hoping to see one, but didn’t have my heart set on it. So at 59mins, after telling David I had 1 minute left at the safety stop, I wasn’t too disappointed I hadn’t seen one. The dive had been full of fish, a few turtles and there’d been a nice, but gentle current to ride. Then David punched me (lightly haha) and pointed behind me, and there it was, MY FIRST MANTA! How they can be even more majestic and graceful in real life than I’d imagined, I don’t know, but it was. Strangely, at the same time, it looked exactly like my mate Si said, a big spaceship.

I sat that night, at Mediterraneo, beaming inside and out. Whilst eating my meal, that I can only describe as gourmet vegan food, I was happily overwhelmed with where I was, and what I was doing. 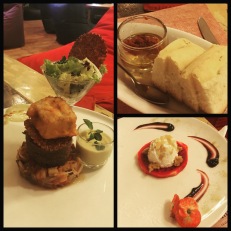 After spending the last year really trying to improve my dive skills, I felt confident and excited to get on the liveaboard the following day.  Not only through completing my Rescue Diver course the month before but asking questions, listening to others, reading up, practicing old skills (mask clearing, taking out my reg) and trying out different techniques on things I’d stopped thinking about, such as fin kicks. Damn, even my stubbornness on not giving up on my beautiful pink Seawing Novas, that seemed designed for what I was most afraid of (giving powerful kicks in current!) seemed to have paid off. Not only could I feel their power, but also, importantly, they were comfortable! My breathing and air consumption had noticeably improved, back to how I was when I first started diving (but was a smoker!) and back to 60 minutes dives. I’d met great people on the boat, already seen incredible and diverse marine life, and this was just the start of the trip. How blissfully lucky I felt to be alive, and be right where I was.

One thought on “#MyfirstManta, Komodo”

I’m working on a song I really like. But I can’t post it for various reasons 😂 so here’s a selfie of me working on said song to diarise this for me 🖤🖕👸⚒
Solidarity in Sisterhood - article I wrote for the @xsisterxhoodx site about the way women treat women - check it out, link in bio. #sxe #xsisterhoodx #sisterhood #hardcore #straightedge #riotgrrrl #worldwidehardcore #supportwomeninhardcore #womeninhardcore #punkrock #punkrockpolitics
Not my best plank form there but a bearst day courtesy of my bad ass adventurer bearstie @laurakairos / F45 ambassador. It was hard work but went so fast (aside from seconds 40-50 of the flutter kicks... haha) and so, so much fun! Awesome soundtrack too. Gorgeous vegan cafe right next door 🌱💚 #f45 #f45training #vegan #veganathlete #butwheredoyougetyourprotein
Unemployed life - good to have Thorns back in LDN with his tales of TABLE BACON.
Free Hong Kong 🇭🇰 Good to be out shouting in solidarity for Freedoms in Hong Kong, Tibet, the Uighers & Falun Gong practitioners. Fuck the CCP. I wish every day for your downfall. Britain needs to take responsibility for its actions, it’s BNO citizens - and for throwing HK to the lions under some bullshit pretence of being honourable. #standwithhongkong #freehongkong #hkprotest #antielab #fucktheHKpopo
Capturing an important moment - shark & all. First time ever playing my songs in front of someone. This woman is my fookin rock (n’roll.) I got shoe . @giddy_gifgaf