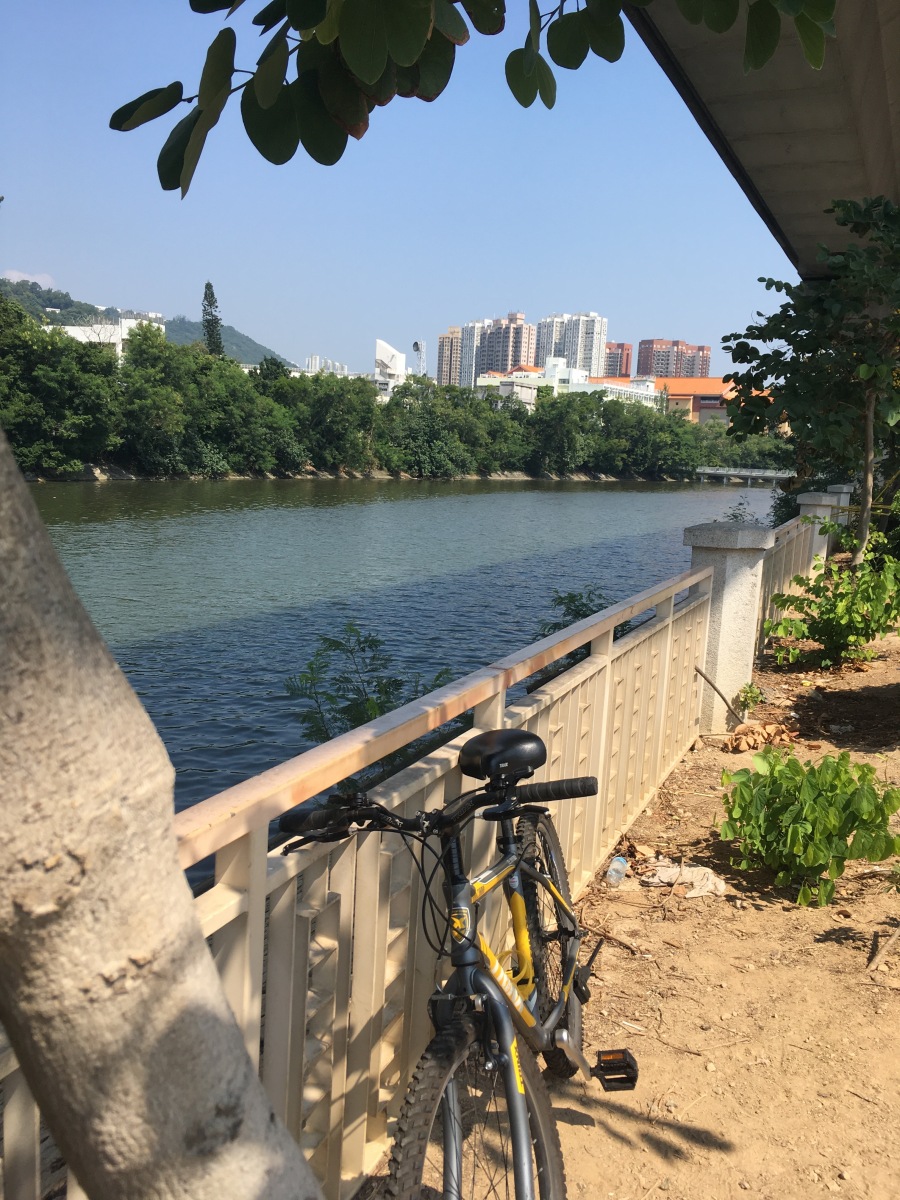 It’s been over a month since I left London, since I’ve been on a bicycle. I’ve been so busy throwing myself into my new life here, I haven’t really missed it like I thought I would, going from pedalling every day to not at all.

I had a bike growing up here either cycling around the small communal playground or along the promenade from Repulse Bay to Deep Water Bay, both great… for a 7 year old. I remember going to a birthday party in the New Territories and renting bicycles; the venue being the equivalent of an ice rink for bikes. Not quite what I was after either.

So after getting a missing-pedal-pang the internet led me to a 20km, simple but pretty route, starting at Tai Wai, near Sha Tin ending at Tai Mei Tuk.  Being a London commuter cyclist I never really cared about distance, and only checked routes for time. I had no idea really how long 20km would take me, but googlemaps assured me it would only be a couple of hours.

Living in Tin Hau I had a very easy journey to Tai Wai. I took a bus from Tin Hau to Hung Hom, then just 3 stops on the East Kowloon (light blue) MTR line, though originally I thought I was getting off at Tai Wo, 5 stops later! Door to door it took about 30 minutes. From Central it wouldn’t take much longer.

Take Tai Wai Exit A on to Tseun Nam Road to find all the bike shops. I had no idea where I would rent from, as the only one I could remember due to it’s English name, doesn’t open until 12pm on Mon – Thurs. I turned up a small street, saw a shop, surveyed the bikes and thought they looked decent enough, and enquired.

Time it took me: Roughly 2 hours… (stopping many times for photos)

Bike Return: I was told it was at Tai Mei Tuk, but the garage was actually before the village, and not in the main cluster of bike shops, but near the sign Tai Po/Tai Mei Yuk, at this garage (right). There is a bus stop right next to it, so very easy to continue on home after. I went over to Plover Cove, ate some lunch, and then cycled back for a few minutes to drop it off. Easy.

Rental thoughts – very friendly and professional. They showed me the bike, asked if that was okay. Adjusted the seat (which I then later adjusted myself too.. very easily) They tested the brakes, but told me to cycle a little and check I was happy with them, and the gears.

Note: You need your HKID card, or if you aren’t a resident remember to take your passport. 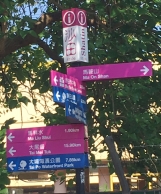 I asked the shop where I needed to go. He pointed diagonally across the road, and said ‘just follow the river.’ And he was right, it was that simple. The path was signposted at any point where it needed to be, other than that – you just kept on going, crossing roads and all, it’s a very clear bike path.

Initially cycling alongside the Shing Mun River, you are still surrounded by skyscrapers and busy roads. But with beautiful bridges and clean, greenery adorned paths, it’s a very pleasant ride. Once you hit Sha Tin Hoi (Tide Cove) you start to really feel out in the open air, for a while. The beauty of this ride, especially for tourists, or those who don’t venture out of Central and it’s surrounds are how much the landscape, both urban and country changes, in such a short distance. 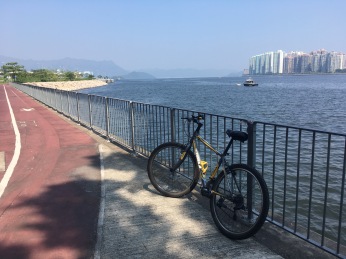 To your left is urban civilisation; the University, the very modern looking Science Park, and to your right there is just Tolo Harbour, and a grand, dramatic hillscape. After stopping multiple times for photos I told myself I needed to just pedal for a while. Remembering that my great achievement of 2017 was to learn to cycle-no-hands I managed to do both! Yes, that’s the 5 year old in me proud as anything! There is something so mentally peaceful about being so physically in balance. The feeling I get from Tadasana (Yoga mountain pose, so simple, but soothing) is the same as being in perfect balance on my bike. Though the latter is a little more fun!

A large buddha statue kept catching my eye on the other side of the harbour. I’ve seen many large white statues, but this just didn’t look quite right.. and more reminiscent of a sinister costume that a particular American hate group wear. After cycling past another similar statue I realised that it must have been covered with white cloth, perhaps for cleaning purposes… but very fitting given what I thought it looked like. 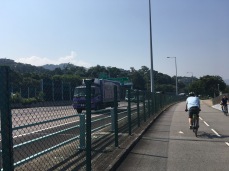 Continuing on, the path varied between being adjacent to huge roads, still totally separate and completely safe, (photo on right) as well as much smaller roads. The route also took you down and through small subways and on much smaller paths, so only greenery either side.

I cycled past village after village, admiring the contrast of the architecture, natural environment and daily life in the New Territories compared to most residential areas of Hong Kong Island and Kowloon.

New Territories, makes up 86.2% of Hong Kong’s land, but only houses 50% of the population. There are hundreds of villages divided up between seven districts. There are even  some remaining Walled Villages, which I plan on exploring soon enough! 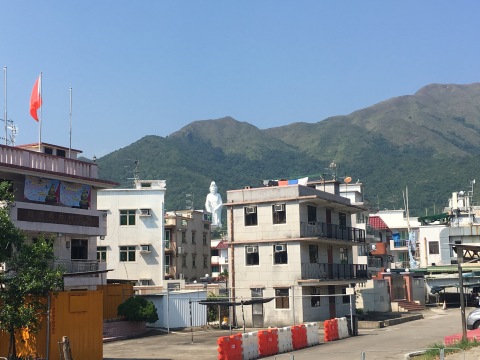 Don’t forget to really look up from the path, not just at the buildings around you, but beyond, at the awe inspiring hills in the distance. Hong Kong’s greenery is so vibrant and raw; Jurassic Park-esque even, to me anyway. Those ferns! (see below)

I was a little puzzled by constantly passing abandoned green ‘GoBee’ bikes. I’d heard that HK had tried to bring in city bike rentals similar to London’s Boris Bikes, but that it had been a failure. Doing a little more research I found that these bikes are dockless, so you can just leave them wherever you want, and many, many people clearly did (see left), hence, the slight feeling of abandonment during a zombie massacre…

Arriving in Tai Mek Tuk was breathtaking. The water was glistening from the sun, despite the haze. Empty boats resting on the water, and almost, silence. I pedalled on past the bike shops and restaurants and up the incline (ignoring the sign.. just because everyone else was…) to cycle across the Plover Cove Reservoir bridge to Pak Sha Tau Island.

As it was a Monday the path had been fairly quiet with only a spattering of ‘professional’ looking cyclists and other fun-pedalists like me. Lots of smiles and friendly hellos along the way. Pedestrians don’t take any notice of the bike paths. My advice – don’t get mad at them, and ruin everyone’s moment – just ding your bell, slow down, and go around.

This peace was especially appreciated sat with my feet over the reservoir watching the butterflies (Hong Kong has beautiful butterflies) and dragonflies. Oh, how I love dragonflies! Given it had been such a gorgeous weekend I can imagine it would have been a different experience the day before and a hell of a lot busier. 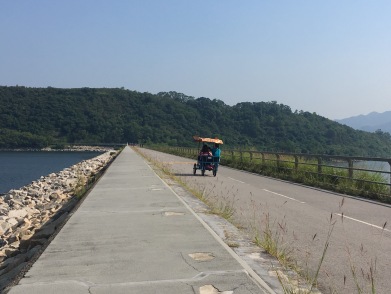 You can also rent three wheeled, four people bikes. Perfect for families, dogs, or even if you’re a large group of stocky American 20-somethings wanting to squeeze into bikes made for slender Chinese! Wish I’d managed to take a photo of this, but was just too busy smiling and soaking it all up!

I sat (and lay) in awe of the landscape around me. I honestly felt overwhelmed by the natural beauty of all that I saw…wanting to stay there forever… until my stomach finally got the better of me and I had to go seek out a late lunch!

It was a superb day out, cheap, and very easy.  I can’t wait to show off the New Territories to my upcoming visitors, and explore it more myself.

Read also: Villages in and around Yuen Long – Nov 2017