I am writing this whilst perched on the side of a flower bed, looking up at the burnt out shell of Grenfell Tower. I cycle past it every week, but I suppose I won’t be next Tuesday – the road I pedal down is currently cordoned off by police, and I can’t imagine that will change anytime soon.

Standing 24 stories tall, it always stuck out in West London’s low skyline. Even more so now; charcoal grey, spattered with rusty orange. Bits of the building are hanging off, dangling, looking as if ready to fall 20 stories below. From where I’m sat it’s framed by bright green trees with a beautiful blue sky behind. The interior of the building appears totally empty, aside from a few people in high vis orange talking to each other whilst pointing at the walls and ceilings around them. Apocalyptic, it looks like an building abandoned and looted years ago. I can only imagine the reality is that everything inside has turned to dust? I feel like I’m looking at a mass grave and wonder why I’m staying here, but I just need to take it in. Think. To mourn with others.

It’s noisy. I’m surrounded by chattering. People unknown to each other standing around in groups, discussing what happened,  the tragedy of it all, what needs to be done. How did this happen? How could this happen? This wasn’t a normal fire! Did you hear what the fireman said? What was the £10million actually spent on? Something needs to be done. Many shared their personal links with the building and the wider area. Grenfell Tower seems to symbolise, represent and hold so much more emotion than just this tragedy.

Birds tweet and sing, fighting to be heard against the sounds coming from the Westway flyover above me. I swear I’ve never heard wings flap so loudly. Children shouting, people laughing, whilst others wipe away tears. People walk by with bouquets flowers.  The smell of weed flits in and out in strong bursts. A few drunk men stumble around, clearly known to many. But, despite the bustle the mood is quiet, sombre. Bewildering even. I hear a teenage girl say to her friend, ‘It’s so weird. It’s so busy, so many people here, but it’s so quiet.’

There are A4 signs calling for justice, for an enquiry. Meeting notices and the numbers of lawyers wanting to assist victims posted are on the walls. But these walls are mainly plastered with posters of the missing. Men, women, children. Many of them have messages scrawled on top – memories, in-jokes, their nicknames.

If ever you wanted a snapshot of London, this is it. All ages, all colours, all religions are gathered here. Walking the streets – circling around the tower. Sharing their emotions; the sense of community and unity is powerful. Introducing each other, giving out cards and information, offering support and even laughter at times.

So why am I here? I wanted to help. To see how I could, if I could. Right now it seems not. So I’m here to pay my respects, to write on one of the many many memorial walls. To show solidarity, to be able to express my sadness and anger with others. To really see with my own eyes the true tragedy of the avoidable fire that, at present has taken 58 lives with untold numbers still missing.

There are numerous volunteer tables giving out water and food. Signs on the community and religious centres saying thank you to the overwhelming generosity, but no more donations are needed. Community patrons wander around, seemingly aimlessly, in blue high vis jackets. Two young boys walked past offering me a water bottle from their wire trolley. I smile and decline. The lack of any official organisation is obvious. Everything is community run. The Queen, the PM managed to get here for a walk around – but didn’t manage to put together an official government (not council – this is too big for them) crisis team on the ground? It baffles me. 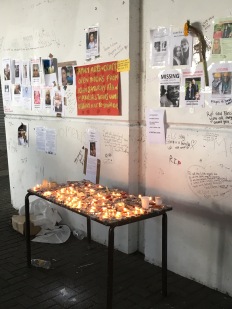 Beneath my sadness is so much anger. I live near here. I should have known about their fight for a safe place to live. We should be shouting louder for each other. We don’t have to vote selfishly, act selfishly. Even though voting for a fairer society is better for you too! (If you really need an explanation on this I’m happy to provide one…)

We need politicians and companies to take care of other people too – not just to think about us. The companies that don’t look after the people? That don’t pay their taxes? Let them go. We will work it out without them. We put into place the NHS after two world wars…. a bombed out capital city, with a nation living on rations. We can make it better.

Charity giving, as wonderful as it is, will not fix the ills of society. Politics, government, community, education. That’s where it’s at. People talk of this tragedy being disrespectfully politicised. But the victims, the community – they are shouting for it to be politicised. It has to be. It wasn’t just a tragic accident. It makes me wonder about the intentions of those trying to silence their voices.

The loss is devastating. I can only hope this tragedy brings change. Leads people to realise the real consequences of only thinking for themselves, or even voting for those that will harm them, for the wrong reasons. And I’m not saying had a labour govt been in power this wouldn’t have happened. It’s not about party politics, it’s bigger than that. We need a shift in priorities for the government and within ourselves.

But today, last week, the week before that London, you have reminded me how truly beautiful you are.  Stay strong and together we will keep fighting the good fight.

One thought on “Grenfell Tower”

Friends friends friends 🥰 So grateful to catch up with these lovely, wonderful people this week - @laurenjames_hk & @willywxc - it had been WAY too long. @laurakairos - it had also been way too long since a lido date. Bearfect as always... Now into self isolation by choice... 🤞🤞🤞 crossed that I get to see family this weekend.
My enthusiasm for Muay Thai/hitting & kicking far outweighs my skills, but getting back into it after 18 months - learning a lot more actual technique, having tonnes of fun - and the endorphin release... is the fookin best. These women are awesome & considering I thought I’d never have a PT but now do, says a lot for @andrew_burns_fitness too! Haha. Excited to get fitter, faster & better... 💖💪💎 🥊 ⚒
First time in a skatepark ON a skateboard - instead of looking longingly at everyone. Absolutely loved it!! Beginners adult lesson. Was super nervous. Fell over a few times and so impressed how well kneepads and wrist pads work 😂 Super sweaty, and smiling from the inside right now 💖🖤 Teen Weeze would be super proud 💎⚒
Last time I saw Kel she came to support super nervous me at my first gig Feb 2020 despite working an all nighter 💞 Time goes so quickly but doesn’t change a thing for the fundamental friends... 🙅‍♀️🙅🏼‍♀️ @vankelsing & I went to see @rattlesnakesuitcase - and I couldn’t resist buying a cushion of hers I’ve been eyeing up for months 🖤💗💚 Chloe made my amazing tie dye shark jumper a decade ago! 💙🦈 Check out her IG/online shop.
Water is everything 💙💞
‘Unfinished Business - The Fight for Women’s Rights’ at the British Library. Great exhibition. Covered so much without being overwhelming - even tho I am feeling a little overwhelmed with my own activism, or lack of it, atm. I guess we all need a break - but the world is on fire right now... it can only be a quick one. Perfect day with my forever friend feminist activist @so_malley 🥰💜💙💚🖤🥰