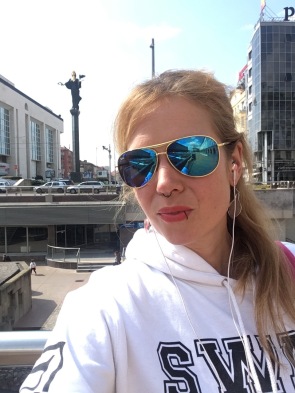 A few months ago a friend suggested we go away for a weekend. I already had a few trips planned, and am trying to save, but, (un)surprisingly I agreed. Georgia & Belarus were tempting, but no direct flights would cut into an already small budget & exploration time. Bulgaria ticked all the boxes; interesting history, beautiful scenery as well as reasonable flights and accommodation. My friend had to back out, but after seeing all Bulgaria had to offer I wanted to take a little look in anyway and decided to go ahead on my own, for a shorter time just staying in Sofia.

After getting up at 2:30am for my flight, which ended with a budding starlet belting out Disney songs to all the passengers I landed in Sofia, dazed, overtired, wondering why I was there, and just waiting for it all to click into place. Going through the ‘EU citizens’ line my heart broke a little and I clutched my UK EU passport tightly and with meaning. Never having really felt patriotic towards the UK I found myself surprised I was now looking longingly at the EU flag, as if thinking back to a long lost friendship. 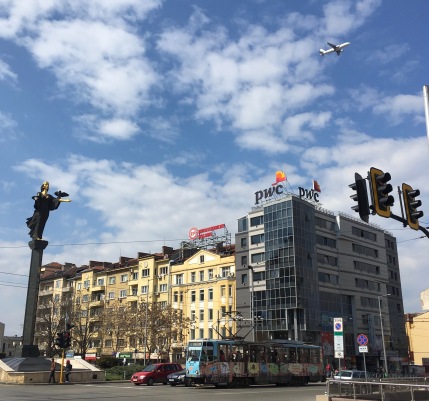 30 minutes and a 5 Euro taxi later I was at the hotel ready to explore. I had the afternoon free ahead of me before joining the Sofia Free Walking Tour at 6pm. Feeling the heat of the sun on my skin refreshingly contrast with the bite of a cold wind, I decided against the museums and to just soak in the elements and wander around a new city. 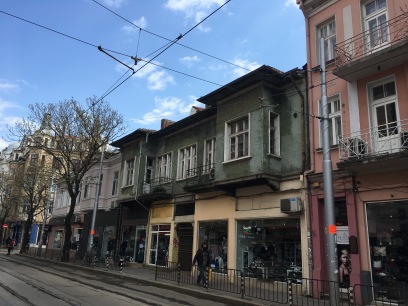 Growing up in Hong Kong, with its tall slim apartment blocks and office buildings I’ve since found the European smaller and wider buildings so charming, vintage & rustic in comparison. It feels peculiar to express how appealing I find these buildings visually, but I find the pastel colours, the wide overhanging windows and abundance of balconies so aesthetically pleasing.

The layers of Sofia’s history are easily seen all around you.  On the drive in I passed many dull, grey, uniform Soviet era housing blocks but in the city itself the Soviet legacy left enormously extravagant buildings impressing me with their scale & grandiosity. Other styles included Baroque, Art Nouveau and German Classical, but surprisingly less noticeable was an Ottoman  influence, given how long they ruled for. Bulgaria is a technically a Christian Country (60%, 2011), though all my guides were quick to mention that religion was not a feature of most people’s daily lives as a remnant of the Communist era.

After crossing a large busy road I was unexpectedly stumbled upon the Amphitheater of Serdica; impressive 2nd/3rd Century AD ruins discovered in 2004 that are gradually being restored. 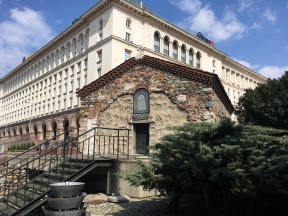 I realised I was nearby Caffetteria where I read I could get some vegan cake, thinking this would be the perfect antidote to my tiredness, which became very apparent with my inability to order or function properly in the cafe, much to the waiters amusement. I sat happily munching away under the strikingly powerful statue of Saint Sofia majestically towering above me, and the Serdica ruins directly behind and underneath me.

Walking on through one of the many parks, I stopped to have a snooze (whilst listening to my Latvian learning tracks… who knows, it might work..) and ate fresh corn on the cob (a favourite travel staple) in front of the Ivan Vazov theatre. It was here I learnt to say thank you (‘Blagodaria’  благодаря) and just using this one simple word was rewarded with such genuine smiles & warmness.

I met the Free Sofia Walking Tour by the Palace of Justice and was surprised at how many people were waiting. The group was split into two, and we spent the next couple of hours being shown around by a very knowledgeable, friendly, and amusing guide, Slavyan. What never ceased to impress me was the gorgeously imposing backdrop of snow-capped Vistosha mountain.

Bulgaria was under the rule of the Ottomans from 1396 until 1878, when with the help of the Russians they achieved independence, and gained more territory after a war with Serbia seven years later. More fighting ensued in two Balkan Wars of 1912-1913 ending after Bulgaria isolated itself fighting against Serbia, Greece, Romania, Montenegro & the remnants of the Ottoman Empire. These wars claimed approximately 57,000 Bulgarian lives & halted much of the economic progress they had made since independence. Two short years of peace ended with entrance to WW1 allying themselves with the Germans & Austro-Hungarian Empire, and declaring war on Serbia. They failed to claim Macedonia in the second Balkan War and this was an incentive for them. 25% of the population (approx. 1 million people) went to war and by the time of the Russian Revolution in 1917 there was much anti war & anti monarchy sentiment which eventually led to the abduction of Tsar Ferdinand in Sept 1918. 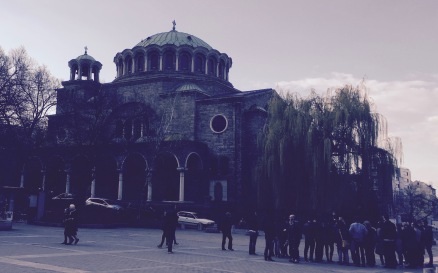 One of our first stops was St Nedelya Cathedral (above) where in April 1925 the Bulgarian Communist Party, funded by Moscow denoted a bomb killing approximately 150 people during the funeral of a General Georgiev who had been assassinated by a section of the Communist Party two days earlier. The main target of this attack was Tsar Boris III but he had not yet arrived as the bombs exploded. The intention was to spark a revolution, but widespread political and social repression followed instead.

Slavyan then took us to an area with more water fountains than you’d usually find in one place! We found out the water comes from a local mineral spring and previously flowed into the Turkish Mineral baths. It was warm, a little chalky tasting, but pretty good. There were many locals there filling up huge plastic bottles due to the supposed medicinal & long-life giving qualities of the water.

Standing near the grand Synagogue of Sofia Slavyan proudly told us that during WW2 after an alliance was formed with the Germans they demanded that all Jews be deported and released into their custody, but due to protests from the government and the public no Bulgarian Jews were handed over. However, 11,000 were deported from Northern Greece and Yugoslavia, which were technically under Bulgarian Control. Their resistance and blocking of the deportations from Bulgaria proper has been praised by the Israel Holocaust Centre. At that time Bulgaria’s Jewish population was 40,000, but most emigrated to Israel leaving a current population of 5,000. 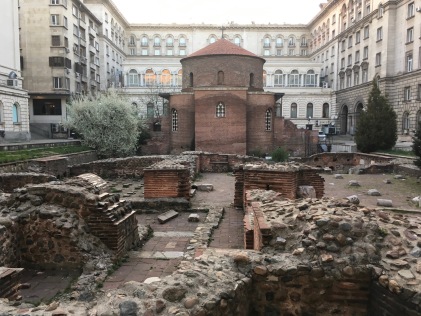 I had seen many red and white bands adorning the trees throughout the city. These are Martenitsa, given to family and friends on the 1st March each year and then placed on trees at the first sign of spring. I love the idea, and really wanted one, but decided against theft… Perhaps next year!

After turning down offers of a pub crawl in what seemed like a really fun, vibrant city, I ended the night alone happily munching away in Sofia’s first (but not only) vegan/vegetarian restaurant Dream House. I may have also had another slice of vegan cake. Which may have also been ABSOLUTELY AMAZING.

(Note: We saw & learnt more on the tour than just mentioned above!)

What a beautiful day for a cycle & quarry swim. What a beautiful week to celebrate @patrick_jones21 birthday - the granite ninja warrior he is ❤️‍🔥 (& more.) Feeling super grateful - for a day to day life right now when I don’t care what day it is - happy whatever is going on - always training - working two jobs I love - flitting between being utterly energised or exhausted. But content. Beyond content. 💎⚒🖤 #lightitup
Out of all the things I’ve been blessed with, I am, I’ve done - being Auntie Lu tops everything. On a group trip around Southern Africa (with strangers initially) we were saying one word to describe each person. Mine was ‘Auntie Lu’ - I was a little confused/taken aback at first, but they explained & I realised there was no greater honour. I also don’t think I knew how much I talked about them all. (And still do.)
This song was my soundtrack to moving to Hong Kong. Always felt like an empowering comfort blanket. Surprised I’ve never tried to cover it before, maybe cause it’s a dance tune. Or maybe it just wasn’t the right time. ❤️‍🔥
Latvian family hangouts in and around Liepāja. The beaches are stunning, the wind was insane and I only lay down in about 50cm on water, covering myself, crawling along as the currents were insane. Still, the non salty Baltic Sea was as beautiful & soul refreshing as ever. Amelijas was the best tour guide & adventure buddy 🥰 🇱🇻
I remember telling a friend years ago, one of my favourite things about life is it can change so quickly, you never know what’s going to happen, who you are going to meet, what small moments or decisions can change things hugely. Of course I hoped for changes when I first turned up at KO, but I had no idea. I even thought how it doesn’t matter if I don’t really get on with people, fit in, cause I’m there to train. But here I am, 9 months later, part of the team (reception, not coaching!!) and very very much feel part of the community & family. And getting more comfortable training, sparring - this is just the start. I’ve always said the most important thing for me is to enjoy my day to day life - be content whether it’s a Tuesday or a Saturday…. And, after trudging through a lot of shit the last couple of years (like all of us) I’m there. After a lot of persistence fuelled by passion I’m now working two jobs I love & training to be something I never thought I could be, until recently. I feel good. I feel my spark again. ⚡️💎
Here’s to 7 years sober. Not drinking is easy now. I don’t want to. The only reason it ever comes up is because other people drink. But it was hard. When I think back to the early days I have vivid memories of scenes, emotions I never talk about, don’t like to vocalise. It was that hard. That crazy. But worth it all - to be here. Mentally & physically. To stop lying to myself, to give myself the self worth and respect I deserved. To enjoy the freedom of not succumbing to addictions. Freedom to be happy in my own skin, in my own beliefs - being aware, present when making decisions, taking actions. Life is more fun now. I’m more confident. I surround myself with people I love, and who love me. So here’s to me, to saying no again and again and again even when others were telling me yes, just go on… have one. And trawling through so much shit, being born again like an highly emotional teenager, learning to navigate all the feelings in a realer, louder, brighter technicolour world. So, here’s to 7 years alcohol free. ❤️‍🔥 #lightitup #sober #straightedge