When I first saw the Great White Shark Conservation advert in the STA brochure I thought I’d be spending a week living on a research boat with marine biologists. I’m not sure why I thought this, but the ambiguous description also meant the other volunteers also no idea what to expect from the program either. My 4 days in Cape Town of sightseeing in the day and partying in the evening was finished off by an old mate coincidently being in town to play a gig at the Majesty. I stumbled into the BackPack hostel gone 1am phoneless with a wake up at 5am still completely pissed (Did I mention this gig was after a full day wine tour?) Greeted by the doorman with my phone as apparently a cab driver had ‘found it’ and perhaps I should give him a reward… 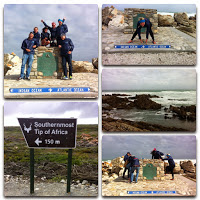 After orientation and a welcome Braii (African BBQ) the first two days were ‘no sea days’due to the swell and we did some sightseeing; headed to the Cape Agulas, the most southerly point of Africa whilst stopping en route for a beer and wine tasting. I also inputted some shark observation data, which gave me a good overview of the day to day expectations and experiences on the Cage Diving Boats.

They estimate around 1000 sharks in that area with about 500 individually logged in the Darwin research program. The reason for the sharks being there? Seals. Many many seals. The sharks seen generally range between 2.5m – 4.5m with females generally larger. It can be quite hard to differentiate given the only way to tell is by the two claspers males have close to their pelvic fins, only visible during a breach or with great water visibility. The girth of the shark makes a huge difference on how impressively large these creatures are. The Diving cage was 4.5m in length and the easiest thing to size the shark up against. 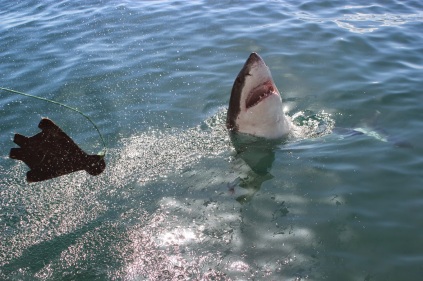 In order to identity or recognise the shark we also needed to look out for the shape of the dorsal fin and if there were any noticeable scars or notches. Many of these they will have been born with and said to be as unique as our fingerprints. Other things to look out for are Rosi’s (pigmentation scars/blotches), scars that could have originated from bites, mating, seal scratches, fishing lines or propellors.

Skin colours and abrasions can be misleading as colour can seemingly change depending on other visibility factors and many abrasions are the equivalent of rubbing suede shoes the wrong way and so reversible. To top it off sharks can also heal.

Given the speed in which they move Shark identification is not easy, but using the above and noting down shapes and sizes of the head, body, face, pectoral fin and tail even after a few days on the boat I was starting to be able to identify re-visiting sharks through size, fins and (very) obvious marks. Of course the first two days I was just too in awe to notice much more than the overall beautiful creature that is the Great White.

A bit of a misleading term. Cage diving itself (at least in Gaansbai) involves wearing a 6mm long wetsuit, wearing a weight belt and mask and spending much of your time with head above water, which I believe is a much more calming and less claustrophobic environment that I’d expected. When the shark swims passed you are told where to look (deep in front, down left, etc) and you hold yourself under water for as long as you can, or until the shark has gone. The water was pretty cold and the visibility when I was there wasn’t great  (but not too bad either) – which I’m sure added to the experience for many; given you saw nothing, and then suddenly a Great White is a metre in front of you, or smashing into the cage. A lot of screams, a lot of laughter. They were so incredible, gracious and just utterly beautiful. Watching them swim underwater or from the boat was just mesmerising.

It has also faced (unfair in this case) controversy that the sharks are being fed unnaturally changing their feeding patterns and in turn lead to more human attacks. The chum consists of oils to spark off a scent trail for the sharks to follow and the baits are heads of either salmon or tuna that are very very rarely caught by the shark (and certainly not large enough to be of anything food worthy for them.)

The boat we were on was a commercial cage diving boat run by Marine Dynamics as part of the Dyer Trust, which are leaders in research and conservation of Great Whites. Check out more about them here:

The trip was led by a qualified Marine Biologist whose main focus is shark research and conservation, educating the wider population about these mysterious creatures and their important role in the marine ecosystem (and wider) and the effects we will feel if they reach extinction. 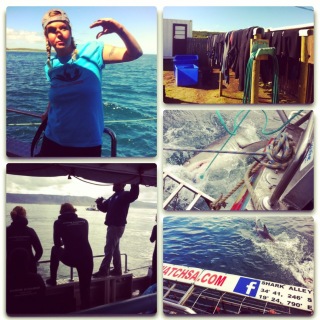 We were the boat skivvys; sizing up and handing out the lifejackets, raincoats, wetsuits and boots. At the end of the trips we’d clear up, clean suits, clean the boat (only once Alba and I were lucky enough to do this.. it’s a man’s job apparently…)

Thankfully I don’t get sea sick. Most people came onto the boat saying the same quite confidently; ‘no no, I don’t need a sick bag,’ but within a few minutes you’d see them turn and rush over with said bags. Main aim was to comfort the puking passengers whilst ensuring they puke in the bag and not off the side of the boat in the toilet. Not as easy at it sounds. 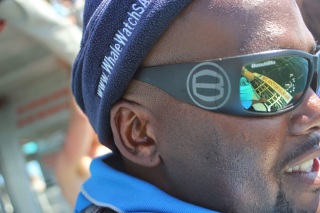 But without fail, not matter how ill anyone was, the excitement in their eyes when I’d point out the first Great White spotted; it was priceless. Other than that we got to play host, which any of my friends know I love doing, handing out food and drinks, talking to people about them and where they were from, and in spite of the puking (I think 70 – 80% on one trip) just trying to make sure everyone had a good time, calming their nerves, answering questions and getting to learn more about the sharks ourselves. It was an absolutely incredible experience. Oh, and standing up top at the front for the journey to and from the site whilst Slashfin (the boat) was jumping and crashing over the waves; magical, therapeutic and ultimately I was in a state of just pure and utter contentment.

I was also lucky enough to spend a day up at Betty Bay with a conservationist who works in the most successful African penguin (also known as the Jackass penguins) breeding program. He gave us a history and overview of the penguins and their habitats and the reasons behind the need for a conservation program. This involved looking for and marking potentially abandoned eggs,  helping move and incubate abandoned eggs, laying down penguin shelters, and even releasing penguins into the water. We were the first volunteers allowed to be involved in this and was an absolute privilege being able to do what we did. The program has rapidly expanded so if penguins are more your thing it’s worthwhile getting in touch.

Being in the towns of Gaansbai (8000 pop) and Kliensbai gave a great insight to another quieter part of South Africa and my only only only regret about this absolute incredible experience was that I’d only booked a week.

The other volunteers and staff were genuinely wonderful and after a week I was really, really, really sad to leave. As well as some fascinating lectures on the Sharks, identification, conservation, penguins our evenings were spent either swimming, playing pool, foosball and ping pong whilst watching football at the volunteer house, having a braii (African BBQ) or cooking ourselves or going out. I went to watch locals play football, helped out at a fundraising night, went to a farmer’s market BBQ, sampled the local bars and even got compliments singing Katy Perry and Kesha karaoke in what I would normally describe as a Redneck bar, but had a mix of all ethnicities getting drunk together. (Note: I was actually shit – perhaps not quite as shit as Olaf, but shit all the same.) I also pulled my hamstring cartwheeling drunk outside the volunteer house at 2am. An injury I have not yet recovered from.