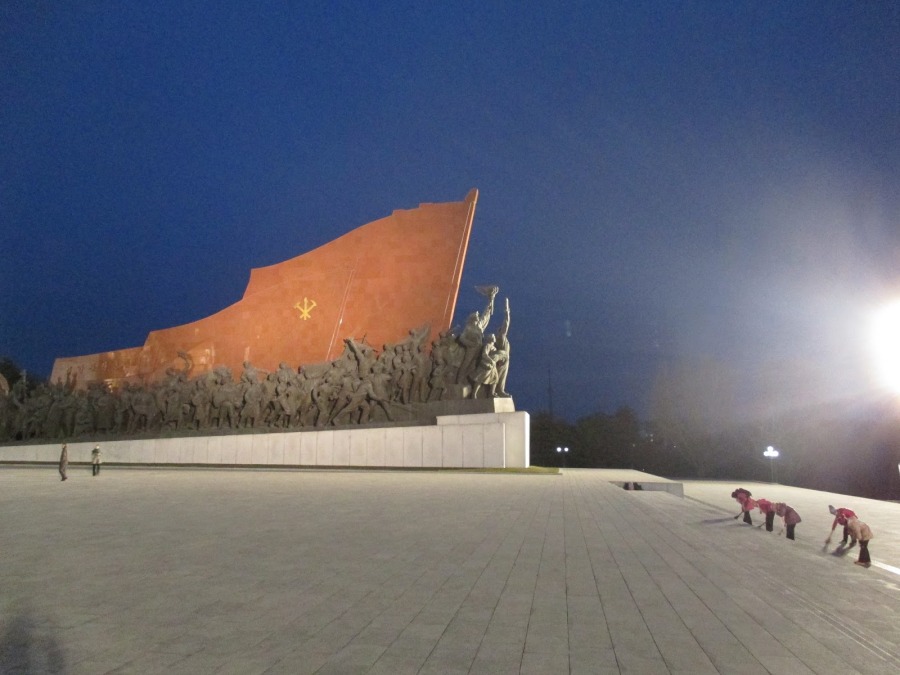 En route to the city the buildings we passed were on average ten stories high, in a standard issue soviet housing style, usually grey, but occasionally pale green or brighter colours.
We saw very few people, and those we did were generally dressed in grey coats, head down, shuffling forward quickly, as I would do if I was walking home after work, when it’s getting dark, in the freezing cold. 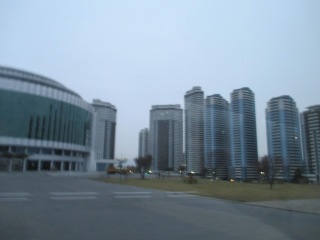 I didn’t take many photos, as in all honesty I was a little nervous of doing so at first, which you can see emphasised by the crappy, blurry quality of most of the ones I did.

As we got into the city itself we were greeted with taller and more modern, silver, mirrored buildings, and with a lack of people and atmosphere it reminded me of Canary Wharf on a winter weekend; new, deserted and soulless. Unsurprisingly perhaps since approximately 75% of the city was destroyed during the Korean War by, we were told 420,000 bombs being dropped on it, which also included napalm bombs.

Our first stop was to the Grand Monument on Mansu Hill (Mansudae).  Here stood two 22 metre bronze statues of Kim Il-Sung and Kim Jong-Il, the first erected in 1972, the second in 2011. We had been told that at each statue we would be expected to bow to the leaders, and usually in a specific manner, such as being set up in lines and walking in unison. We generally pulled this off as successfully as young primary school kids would, but don’t feel we caused any offence by this. The locals seemed to be able to manage what we couldn’t and look dignified, walking in unison rather than us, more like herded cattle. 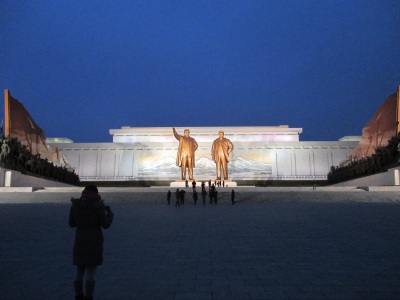 We were given the opportunity to purchase flowers to pay our respects, but in all honesty I can’t remember if Katie & I did or not. (After writing this I added the picture, and can (un)clearly see flowers in Katie’s hands, so I guess we did.) 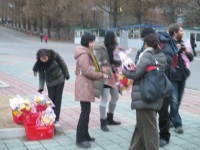 Though it was not compulsory to bow,  aside from at the Mausoleum, we were told to let our Western guides know if we did not wish too do so. As I was there to observe the country and its people, not trying to make any kind of political point or criticise, I was happy enough to bow to the statues.

To the sides of the statues were two large monuments in tribute to the Revolutionary Struggle and Socialist Revolution, comprised of workers, peasants, farmers, soldiers, and looked very similar to monuments I had seen in Moscow.

Getting off the bus and just standing in Pyongyang itself was a surreal experience. There were a few locals around us, either just going about their business or also visiting the statue, and I wasn’t sure what to expect from them, or what they expected from us. Largely, I felt we went unnoticed by most people on the street, which actually differs greatly from how I usually get stared at in other non Western countries, perhaps merely down to the fact I was bundled up as warm as possible, rather than having my tattoos and piercings on show.

The main exception to this disinterest during our trip was from groups of children, or when we were in closed environments such as restaurants, bars, or on the metro and people were often very keen to engage with us. That said, given that we were on a large square, surrounded by some of the biggest and tallest buildings in the city, there were comparatively very few people about, but it was early evening, so perhaps would have been different a few hours earlier.

Before heading to our hotel we stopped off at a restaurant for dinner and were put in a private room upstairs. A fantastic and varied Korean feast was served, with lots of vegetarian dishes and it was a quiet dinner (the only one of the trip I suppose) making small talk and getting to know each other. 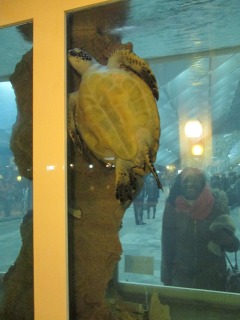 We then headed to our hotel, Yangakdo International, a 30-story hotel located on a small island, that was in fact only slightly bigger than the hotel, and the whole place, was in a word, Grand.

The reception area was huge, but empty. Marble floors, marble desks, marble walls. There was a small aquarium tank with a large sea turtle that we genuinely thought was dead, and assumed had committed suicide. Sadly, I suppose, we found out a day or so later it was alive.

We checked in, were told not to visit the infamous mystery 5th floor, which I believe is where Otto Warmbier stole the poster from, and subsquently sentenced to 15 years hard labour. There were 800 rooms, and I was told in peak season it was fully booked. Aside from our group there didn’t seem to be many more guests, and those there were were all of Asian ethnicity, and were staying on different floors, which appeared not to have working lights in the corridors, unlike ours 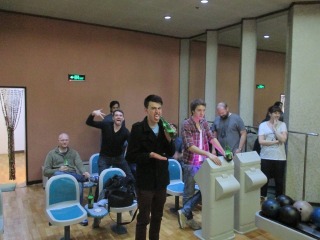 The group met for a few drinks at the bar, then went for more at the Bowling Alley. The pins were held up by strings, and despite not once knocking all of them down, I was consistently bowling strikes. I liked to think that Kim Il-Sung was looking down favourably at me. We were also joined by one of the hotel waitresses who was pretty shit hot at bowling.

We finished up the night rather late in the Karaoke Room. I was genuinely surprised at how openly we could talk, and wasn’t at all expecting a late night partying, but it set the precedent for the rest of the trip. 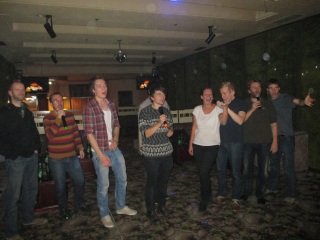