George, the brother of a boy who was in the house whilst Hollis was there (now his house), Wilf and Christopher.

We started the day by visiting Juno (Canadian) and Gold (UK) beaches. Throughout the tour we were of course told many facts and figures, but it was the stories of despair, chaos and bravery that really stuck, and gave me an insight into the hellish, chaotic reality of the situation.

Hollis was a Company Sergeant Major with the Green Howards, one of the assault battalions at Gold Beach. As the company moved inland after the initial beach landings, Hollis and his Commander investigated two German pill-boxes which had been by-passed.

Hollis rushed forward to the first pill-box, taking all but five of the occupants prisoner and then dealt with the second, taking 26 prisoners. He then cleared a neighbouring trench. Later that day, Hollis led an attack on an enemy position which contained a field gun and Spandau machine guns. After withdrawing he learned that two of his men had been left behind and told Major Lofthouse, his commanding officer; “I took them in. I will try to get them out.”

Taking a grenade from one of his men Hollis carefully observed the enemy’s pattern of behaviour and threw it at the most opportune moment. Unfortunately, he had forgotten to prime the grenade but the enemy didn’t know this and kept their heads down waiting for it to explode. By the time they realised their mistake Hollis was on top of them and had shot them.” 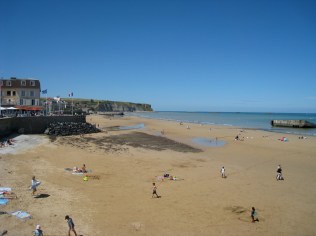 We went to Arromanche and saw remains of the Mulberry Temporary Harbour, which is not so temporary it seems – an utterly amazing feat. It’s really hard to imagine what it would have looked like on the day, and subsequent days. And it’s weird seeing kids playing on and around the leftovers! The American’s didn’t think it would work, or last the storms but the British insisted. Mulberry B stood strong, whilst Mulberry A at Omaha didn’t – very diplomatic.

And of course we visited more war memorials and cemeteries. Again, happily walking around in the sunshine, reading the graves, my thoughts caught up in what they did and BAM! Tears.  I want to lay down something for every single grave I come across. I want to shake the hands and thank the two veterans with me on this tour, but I feel it would be naff. If they drank, perhaps I could have a drink with them.. and then tell them.. but they don’t.. and I’d feel stupid, it’s too much. So I’ll write it here. Thank you Wilf Vernon. Thank you George Chamberlain. You brave men. I owe you. Thank you.

I also went to see the Bayeux Tapestry (in Bayeux surprisingly… a large amount of people have asked me where I saw it..)  I thought I could do with a ‘break’ from the harshness and horrors of D-day…. when if you know anything about what’s portrayed on there; it’s pretty gruesome.. ending with an arrow in the eye. But somehow when it happened almost a millennium ago it doesn’t have the same impact on the soul.

So really to me it was just a fantastic embroidered depiction of a hugely important event in the 11th Century. And it’s so damn cool. Honestly! I thought I guess I should see it after trying to draw it at school when I was ten… but  couldn’t remember exactly what happened (hey.. I’m all about the modern history…) but seeing it and being talked through it  with the headphones was amazing. An old skool comic? My god I love History.

As a little side note – one of the ladies on our tour was a lovely, timid, Belgian brought up by her WWII Resistance Grandparents. This was her third time on the same tour. Dressed like a resistance fighter (think the women in Allo Allo); she was obsessed with Remembrance. Not D-Day itself, but remembrance. She had acquired lists of the fallen from various people she didn’t know around the world whose graves to place flags, poppy candles and crosses on.  She told me how members of her family call her crazy, and since the age of three she has been attending remembrance services across Europe. She tried to join the army, but was rejected. (Physically she is fit and healthy). Yet, on seeing some (mild) footage today of the D-Day landings and the following days; she fainted. And then became more withdrawn and couldn’t bring herself to eat. I understand her problems are far more than a few minutes of a film, and in reality probably don’t have much to do with the witnessing the reality of war, but it saddened me that she spends so much time on the remembrance, when really, it was freedom they were fighting for, and a freedom she is so obviously lacking.